Regional District outlines its Financials for 2014

As the City of Prince Rupert did earlier this month, Skeena-Queen Charlotte Regional District has released the details of its final Financial statements for the 2014 fiscal year, providing overviews on salaries and expenses for both sitting members and current staff.

Board Chair Barry Pages tops the remuneration list with a salary of $20,952, along with expenses claimed of $14,416.

Below him on the list are thirteen names from the elected officials and Members of the Board, with three members from Prince Rupert listed for the transition year between old and new council representation.

Councillor Nelson Kinney received $13,427 in salary and claimed 862 in expenses, former Councillor Anna Ashley received $12,781 with 970 in expenses claimed and Mayor Lee Brain, who joined the Board of Directors in December received $1,114 for his first month of work on Regional District, to go along with the nine dollars in expenses that were claimed. 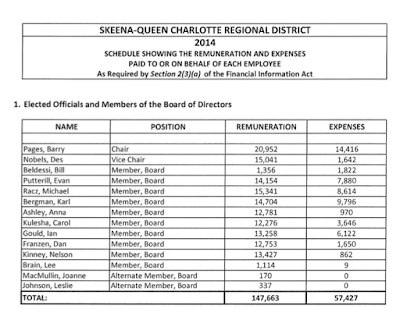 As for Staff employees, only two of the Regional District Staff made the list of over $75,000 that require reporting, with Joan Merrick and Robert Kidd breaking that salary mark.

The two senior staff members accounted for $144,162 and $87,445 in remuneration and expenses respectively.

In total, when all the number crunching was completed, the full remuneration and expenses statement for both elected officials and staff members at Regional District amounted to $1,457,717.

The full overview of the Regional District financials can be found here, as part of the Agenda for the June 19th meeting, the Statement of Financial Information review starts at page 19 and continues on until page 37.

When it comes to expenditures, Municipal Debt Servicing, Solid waste management on Haida Gwaii, Regional recycling and Administration claim the largest of sums of the four million dollars plus amounts that were provided.

Key information and the detailed breakdown on revenues and expenditures at Regional District can be found from pages 26 to 29.

Email ThisBlogThis!Share to TwitterShare to FacebookShare to Pinterest
Labels: Regional District Financials for 2014