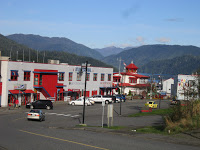 The prospect of a rainbow coloured crosswalk for the Cow Bay District received the approval of Prince Rupert City Council on Monday evening, as Council members approved a motion to move forward with the idea.

Councillor Thorkelson opened the discussion speaking to the nature of an inclusive community that the crosswalk would provide and noting some of the backlash against the crosswalk that had been found on such social platforms as Facebook. She added to her thoughts on the topic by asking that those making such comments rethink their position and offer support for the plan.

Councillor Niesh expressed a few thoughts related to the cost of the crosswalk, which is estimated to be at 1800 dollars. While noting that he had no issue with the idea of the crosswalk itself, he did outline that it was a project that would require constant maintenance each year and he would prefer that fundraising efforts be used to provide for the crosswalk.

The City Manager provided confirmation  on that theme, advising that the City repaints its crosswalks and sidewalk areas every year, with the cost for the rainbow crosswalk one that would be increased owing to the use of different colours.

Other council members who spoke to the topic included Councillor Mirau who stated that he was  in favour of the crosswalk, suggesting that a call out into the community to provide for fundraising for the work to be done would most likely be met with success.

Councillor Randhawa offered up some concerns related to the ability for drivers to see the crosswalk at night, the Mayor observed that there would be white borders making the crosswalk visible.

Councillor Cunningham sought out some clarification as to whether the crosswalk would have any impact on the future Atlin project, he was advised that it would not.


With the discussion at an end, Council voted to approve the motion for the proposed crosswalk project, though no timeline was announced as to when it would be installed in the Cow Bay area.

It also wasn't made clear at Monday evenings session if the painting of the crosswalk would go ahead with civic funding, or if the work to be done would have to wait until funds were raised in the community.

On the theme of fundraising for the proposed work, more information on how residents can contribute to that fund can be found by contacting City hall.

More background on the plan can be found from our item of earlier this week.

For more items related to City Council discussions see our archive page.
Posted by . at 11:01 AM