A New Year and new opportunity with the City

The City of Prince Rupert is picking up where they left off in December when it comes to growth of the civic employment rolls, with a new job opportunity posted to the city website this week, as the City seeks the services of someone for the Operations department.

A job posting for an Engineering Technologist is up on the Help Wanted Board, a permanent position that pays $31.07 an hour plus premiums over the course of a 40 hour week along with what is described as a great benefit package and pension plan.

The position is part of the unionized membership from CUPE and follows the terms of the Collective agreement reached last year with Local 105.

While there is a fairly lengthy list of duties for the job, the primary role for the successful candidate will be to provide both surveying and computer drafting services to the Engineering and Public Works Departments, as well as to carry out the day-to-day tasks that come from requests for technical information, counter and telephone enquires, as well as to monitor some of the capital expenditure projects and special projects.

You can review the full range of qualifications and skills required from this job fact sheet. 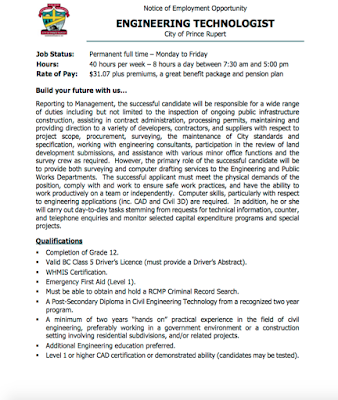 As 2015 came to an end  it had proven to be a fairly active year for employment options with the city as we noted in our archive from last year, highlighted by the range of jobs created with the city through the year.  Many of them new positions for civic employment, others returning personnel to positions that been vacant for a number of years.

Much of that employment growth and other Civic spending was created as part of the City's planning for major projects for the future, with funding from the City owned Legacy Corporation used towards some of that employment creation.

With a new year underway and into the second week of 2016, it will be interesting to watch what kind of mix the city provides when it comes to their list of employment options through to December.

You can follow along with us through the year from our Labour archive page here.

For more items related to developments with the City of Prince Rupert see our archive page here.
Posted by . at 9:47 AM

Email ThisBlogThis!Share to TwitterShare to FacebookShare to Pinterest
Labels: New Year starts off with a job opportunity with the City of PR