The efforts of shore workers in Prince Rupert to raise awareness on local issues and perhaps to help save their jobs at the Canadian Fish Cannery continues on into January, with UFAWU-Unifor representatives asking residents of Prince Rupert to join in on their letter writing campaign to Ottawa.

As we outlined back in December, UFAWU-Unifor hosted a letter writing blitz late last year to deliver its message to federal officials in the nation's capital of the need to address a number of issues related to the licensing of vessels in North Coast waters and the need to ensure that their catch is processed on the North Coast .

UFAWU-Unifor received their resolution of support from Council following a presentation at the December 7th Council session, incorporating that support into the letter  now currently being distributed to those interested in lending their assistance to the information campaign from the North Coast.


Through the months of November and December the union leadership has frequently spoken out about the plan to eliminate the canning lines at the Canadian Fish plant on George Hills Way, which will see a large number of the workforce lose their jobs this year, discussions are still underway between the union and the company to sort out the seniority provisions and other matters related to those job losses.

You can review the text of the letter that union officials are sending to Ottawa below: 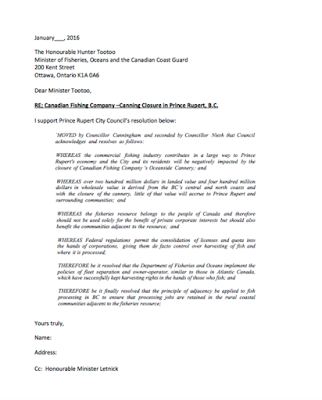 For more information on the letter writing campaign and how you can become involved with it, see the UFAWU-Unifor Facebook page.

More items of interest related to the Fishing industry on the North Coast can be found on our archive page.
Posted by . at 8:08 AM