The list of contenders for the 2015 Business Excellence Awards has been released and with the ballots now delivered, online voting will soon commence across the North Coast, as the Prince Rupert and District Chamber of Commerce prepares to honour the best of the region.

Through January residents of the North Coast submitted the names of those companies and services that they believe have had an impact on the region and deserve recognition.

You can learn more about how the Chamber conducted their nomination search here.

From those suggestions, the Business Excellence Awards organizers put together the lists of top nominees, an interesting mix of newcomers to the area and a few of the old established companies and organizations on the North Coast.

The names for the Final Ballot session were revealed by the Chamber on January 26th, featuring a cross section of Prince Rupert's Business community in the fifteen different categories.

The online voting process will start on February 1st and continue through to February 14th.

Those that wish to vote, can make their choices once each day over the fourteen day voting period. Giving the public the final say in determining which businesses and individuals have made their mark in 2015.

When voting opens on February 1st, you will be able to gain access to the Chamber of Commerce virtual voting booth from a link on the Chamber website. 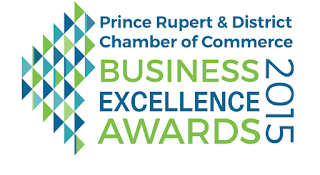 Categories and their sponsor for the 2015 Business Excellence Awards are as follows:


Rookie Business of the Year
Sponsor: Community Futures of the Pacific Northwest


Home-based Business of the Year
Sponsor: The Crest


Newsmaker of the Year
Sponsor: The Northern View


The Winners from each category will be announced at the Gala, taking place at the Lester Centre on February 27th.

Tickets for the Awards Ceremonycost 30 dollars and are available through the Chamber of Commerce at 100-515- 3rd Avenue West.

You can find out more about the Business Excellence Awards and the Gala from the Prince Rupert and District Chamber of Commerce website, Facebook Page and Twitter Feed.

For more items related to the Commercial Sector on the North Coast see our archive page.

Email ThisBlogThis!Share to TwitterShare to FacebookShare to Pinterest
Labels: Chamber of Commerce Award Nominees for 2015