A fascinating bit of Canadian history will be retold tonight at Prince Rupert City Council, as council members give consideration to a request to approve and support the installation of a memorial plaque to celebrate the achievements of a Prince Rupert pioneer, Lieutenat Colonel Cyrus Wesley Peck.

Acting on a request and with the support of the Prince Rupert Rotary Club, Council review the plan for commemoration that will see a large boulder with an inset memorial plaque installed at the city's waterfront park.

Lieutenant Colonel Peck the Commanding officer of the 16th Battalion of the Canadian Scottish CEF was a Canadian recipient of the Victoria Cross for service World War One, he received his award following the engagement of his battalion in action near Villier les Cagnicourt, France. On September 2nd 1918,  under fire of enemy artillery and machine gun fire he led his troops by making a personal reconnaissance of the enemy positions, returning to his own lines to reorganize his battalion to direct support to allow his troops to advance.

As well as winning the Victoria Cross, Lieutenant Colonel Peck received the Distinguished Service Order, was mentioned in dispatches from Europe Five times and was wounded twice.

More background on his Victoria Cross can be found here from this item from the National Defence and Canadian Forces Archive. The Citation as issued in November of 1918 is as follows: 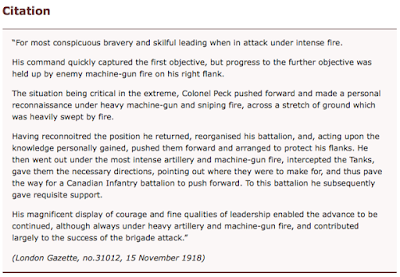 The Lieutenant Colonel was also a respected member of the community, successful in the commercial fishing industry and active in British Columbia Politics, elected to the House of Commons as the member for Skeena while serving in France and upon his return to Canada sitting in the BC Legislature as an MLA for Saanich and the Gulf Islands.

His ashes were put to rest in the waters of Metlakatla Passage in 1956.

You can learn more about the proposed commemoration plans from the City's Agenda package for tonight, the item on the Lieutenant Colonel can be found on page 13.

More background on Discussions from Prince Rupert City Council can be found from our Council Archive listings.

Email ThisBlogThis!Share to TwitterShare to FacebookShare to Pinterest
Labels: Support for Plaque to honour First World War hero Colonel Peck to be considered at Council tonight