Mayor Brain's 2030 Sustainable City Select Committee gets approval, but not without spirited discussion on its purpose

The Mayor received Council's go ahead when it comes to the Terms of Reference for his latest Committee plans, with Council reviewing his proposals for how the City should move forward on issues of sustainability and other initiatives towards those goals.

As part of his overview for the process ahead, the Mayor focused on such issues as renewable energy production, food production and other sustainable related initiatives, as just some of the items that will be reviewed, with the intention of integrating those concepts into the city's core planning.

Adding that his concept will embrace three general areas, jobs and the economy, greener communities and social well being to help develop a culture of placemaking.

The makeup of the committee would consist of a combination of local experts and outside advisors where gaps exist in the local community, as well as select city to staff to ensure proper integration of policy into other areas of work that the city is moving forward on.

The direction of the Committee is to deliver a report back to the Council with policy recommendations and to outline goals and actions to be implemented over the next five years, with recommendations as too any funding and grant opportunities that are available.

Councillor Thorkelson called the proposal an excellent idea, but took note of a number of items from the synopsis of the Mayor's Terms of reference, noting the definition of it as a Mayor's Select Standing Committee and expressed her preference to see it  created as a Committee of Council.

The City Manager provided some background on the nature of Select Committees and how it would work in this particular instance, allowing the Mayor to appoint people from outside of Council. The Mayor  followed up on the City's Managers comments by advising that he would like to see all of Council to be involved in the initiative.

Councillor Thorkelson however reinforced her desire to invite the community to be a participant in the Committee and expressed her worries that the concept of the Select committee might mean that local residents could feel squeezed out of the process, believing that there is no room for their participation.

She also noted that the concept was almost that of a Super Committee and was something that could probably be divided up into up to ten different committees.

Councillor Cunningham inquired if there the Committee plan was going cost to the City any money, to which the Mayor stated that there would be no cost involved in his initiative as it would be volunteer based.

After a few more thoughts on the issue, Council then moved forward with the creation of the Committee. 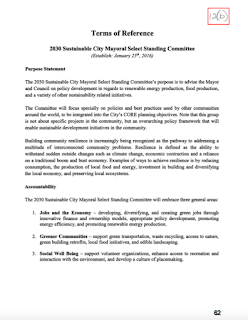 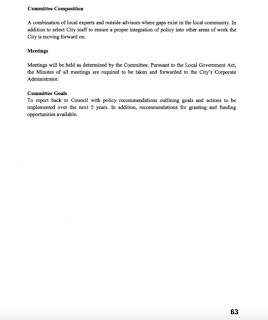 More background on the Mayor's presentation and Council's questions can be found on our Council Timeline feature.


You can also review the discussion on the Mayor's plans from the City Council Video Archive, it starts at the one hour, fifty nine minute mark.