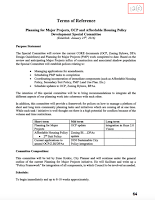 City Planner Zeno Krekic will be at the helm of a committee with a long running name that calls to mind something along the lines of Supercalifragilisticexpialidocious, with Council on Monday night accepting the terms of reference for the "Planning for Major Projects, OCP and Affordable Housing Policy Developments Special Committee"

Mayor Brain introduced the Committee plans, offering up the background to what it hopes to accomplish and who will be involved in bringing all the moving parts of the project together.

As the Mayor explains it, the Committee will be looking at policy relating to managing applications for amendments to zoning, planning and procedures, as well as such issues as affordable housing issues, secondary suites policies, planning for major projects as well as a range of other items.

The intention is to integrate all the aspects of the city's planning work to be coherent to each other, as well as to provide a framework for policies to manage what the Mayor described as a plethora of short and long term planning tasks and initiatives.

There are short, mid and long term goals in mind from the Committee work, with the short focus directed towards the planning for major projects affordable housing policies and the current applications that the city has amended into how they see those policies developing.

The process would then move into a mid and long term strategy of updating the Official Community plan, zoning bylaws and downtown permit guidelines

Mr. Krekic will facilitate the efforts of the working group and create a policy framework to integrate all of the components. They will work under a timeline of eight to ten weeks, with the plan to have it all available for council's adoption at the end of the ten week process.

Councillor Thorkelson took the lead when it came to questions related to the Mayor's Terms, raising a number of issues related to her concerns over the affordable housing desires of Council.

She also expressed some confusion over whether it had been designed as a committee of staff, or whether it's one which Council would take a more active role in developing policies forward. Calling attention to some items of concern that she had in what the Committee might be addressing.

The Mayor noted that in the time frame of the Committee work, that there should be room for specific conversations with Council as to what they want to do with specific concerns.

The City Manager offered up his overview as to how he interprets the committee structure and planning and what would be required of council members as part of the process.

Council accepted the terms for the Committee creation, with council members to advise Mr. Krekic this week as to the nature of their interest in the project.

The first meeting of the Committee will take place in February.

More background on the discussion can be found on our Council Timeline Feature, while a full review of the Committee concept can be examined through the City's Video Archive starting at the  2 hour, fourteen minute mark.