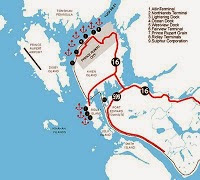 The Prince Rupert Port Authority outlined some of the major benefits that could come the way of the North Coast should the industrial giant of the region fully realize its development plan through 2025 and beyond.

Following on the theme of Port President and CEO Don Krusel's recent speech to the Prince Rupert Chamber of Commerce, which we outlined on the blog in December, a media release from Monday provided some of the hard numbers that went with that presentation.

Among them the eye opening prospect of close to 5,000 new jobs in Northern British Columbia being created related to port activity, employment opportunities that would be spread out from the North Coast through to the Northern Central Interior region of the province.

Locally besides a growth in port related development, local municipalities stand to benefit by increased taxation receipts from port properties in the region, with estimates of 59 million dollars delivered annually to the City of Prince Rupert and District of Port Edward.

The ambitious port study also noted the impact for both the provincial and Federal governments that such a high tempo expansion of options through the global gateway that Prince Rupert could become.

Though a good portion of all the planning will require a few seem to suggest that a few stars will have to align and the global financial picture remain calm, as they look towards the full build out roll out that they have  outlined.

“The vision of Prince Rupert as a leading North American trade gateway builds on our strengths and our track record,” ... “The question is, can we achieve it? We believe we can, but it’s going to take a vision that aligns the priorities, efforts and investments of local communities and First Nations with the economic opportunities that are presented.” -- Don Krusel, President & CEO of the Port of Prince Rupert looking to the future and the opportunities it may provide for the North Coast.

The media release from Monday highlighted the current focus of development for the Port in the region and includes further development of the Fairview Container Terminal, the Ridley Island Industrial area and potential opportunities on Lelu Island, all of which would offer a platform to ship over 100 million tonnes of cargo annually.

Further to the Land use planning, the study outlined a few of the current options being considered for the industrial footprint that the Port has on the North Coast waterfront among some of those potential projects or those currently underway are:

A selection of local municipal and First Nations leaders offered up some thoughts on the Port's long range look, finding a number of positive aspects to the presentation as they look to the future with some optimism.

You can review those thoughts and  review some of the development notes from the Port's media release here.

For more items related to the Port of Prince Rupert see our archive page here.
Posted by . at 9:39 AM