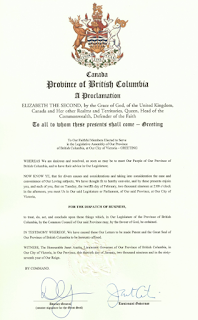 By the time that BC's elected officials settle into their seats at the British Columbia Legislature next Tuesday six weeks will have passed since the start of the New Year, but as MLA"s return to their work, it will be a case of out with the old, in with the new!

Yesterday, the NDP government announced that they will be proroguing the previous session on Tuesday morning, bringing in a new session in the afternoon, highlighted by the deliver of the Speech from the Throne by Lieutenant Governor Janet Austin.

The address comes following a by-election victory in Nanaimo last month that serves to secure the slim majority that the NDP holds in the Chamber thanks to their confidence of supply agreement with the Green Party.

The Speech from the Throne normally makes for a lofty document that delivers some of the main talking points and ambitious plans ahead from the government in power.

The day makes for one that is much in the way of message making for the Premier and his cabinet, with little in the way of explanation as to how they may deliver on their plans, or pay for the projects that will be outlined.

The Parliamentary Calendar has also been published for the year ahead, with MLA's in attendance at the Victoria Legislature through to May, with the last day at the Legislature set for May 30th,

They then will be back in their constituencies, as well as fit in their summer vacation period from June 1 to October 6th.

MLA's return to work for a Fall session on October 7th, with a five week block of Legislature marked on the calendar to wrap up the year. 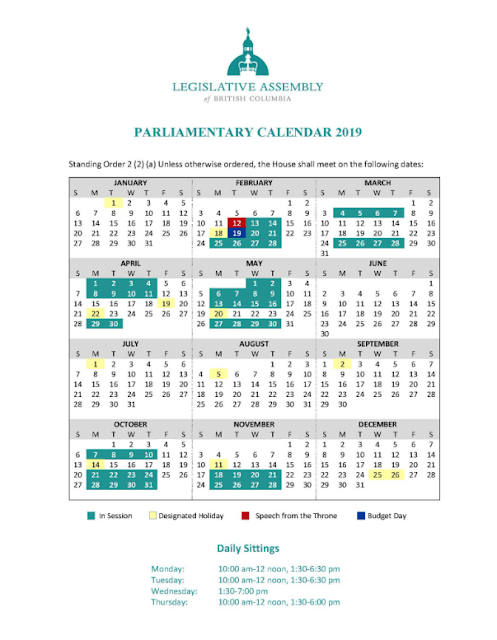 For a look at notes related to the North Coast and Skeena constituencies see our archive pages below:

A wider overview of the provincial political scene can be found from our political portal D'Arcy McGee.

Email ThisBlogThis!Share to TwitterShare to FacebookShare to Pinterest
Labels: MLA's back to work with New session and Throne Speech Feb 12 2019