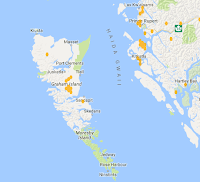 However, the plan has hit some choppy waters, after the Council of the Haida Nation expressed its concerns over the prospect of the lodge's reopening plans set for this Friday.

The CHN concerns were relayed through a weekend news report from CTV BC which outlined some of the background to the weekend's events.

Key to the situation is the Haida's announcement of last month towards extending a Stay Away message from the islands.

As we noted at the time, that statement had Haida Gwaii officials advising that the the Islands  should remain closed to visitors into July; so far there has been no official comment relayed through the Haida information platforms related to the weekend situation related to the fishing lodge.


In a statement posted to the fishing lodge Facebook page, QCL officials address what they  say was harassment by CHN boats over the weekend,

As well, as part of their update on their reopening plan moving forward,  management notes that the lodge is 45 kilometres from the nearest community and is only accessible by boat, or air, noting that they are complying fully with all of the orders and guidelines issued by the Province of BC, health authorities and WorkSafeBc.

"We have now gone to significant expense to eliminate all contact with the residents of Haida Gwaii and their communities by choosing to fly by helicopter directly from the mainland, Prince Rupert to Naden Harbour, an extreme measure, taken solely for the purpose of protecting the citizens of Haida Gwaii".

The letter further outlines the nature of their past correspondences and discussions with the Council of Haida nation, as well as to note that they have been in contact with the RCMP over the weekend incident.

The difference of opinion on Haida Gwaii over restarting the fishing lodge, comes as the Province of British Columbia moves forward with its Phase Three plans for restarting the provincial economy, a move that has been controversial for many coastal First Nation communities in recent weeks.

In late April, the City of Prince Rupert had shared some of the concerns over potential travel to the region, joining in a coalition with other communities and the Council of the Haida Nation.

Council members had at times earlier this spring also expressed some concern over the restart of the sport fishery, particularly as the reports came in at late March and early April of out of town visitors in the region, that during a period of concern over the COVID pandemic.

The restart for the local sport fishing industry however has not made for much discussion in recent weeks for the Prince Rupert council membership.

Further notes on Prince Rupert Airport can be explored here.

Email ThisBlogThis!Share to TwitterShare to FacebookShare to Pinterest
Labels: Haida Gwaii fishing lodge looks to reopen amidst some controversy