North Coast MLA Jennifer Rice used some of her speaking time on Wednesday to relay to the BC legislature news of the passing of paramedic Mike Sorensen, making note of his lengthy career with the BC Paramedic service and the impact he had on the Prince Rupert community, where he served as the Manager of Station 684.

I'd like to take a moment to inform the House that here in the north coast, we recently lost an important leader. Mike Sorensen was a paramedic and patient care delivery manager for the north, based out of station 684 in Prince Rupert.

Mike started with B.C. emergency health services 20 years ago in Terrace and worked as a primary care paramedic in Masset, Prince Rupert and Vancouver before becoming unit chief of station 684 in 2015.

The following year he was promoted to manager. Mike's interpersonal and mentoring skills provided a real support to his paramedic colleagues and in making a difference to patient services here in the north. He loved the outdoors, often fishing and hunting with friends.

My thoughts are with his family and with his colleagues during this difficult time. Mike will be greatly missed.

Mr. Sorensen, who passed away on July 4th, was honoured by his fellow emergency responders on Monday with a ceremonial send off in front of the Prince Rupert RCMP detachment, as members of the RCMP, Prince Rupert RCMP, BC Ambulance Service and other agencies paid their respects in tribute for the long serving member of the Paramedic service.

The Ambulance Paramedics of British Columbia also paid tribute to Mr. Sorenson, posting a message of condolence to their Facebook page on Tuesday. 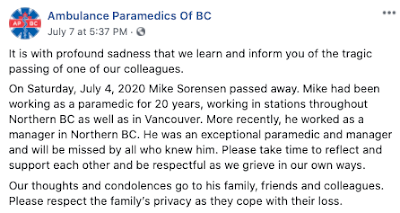 You can view Ms. Rice's statement to the Legislature from the Wednesday House video archive starting at 1:40 PM.

Further notes on the work of the Legislature can be reviewed here.

For more background on Emergency Responders in the Northwest see our archive page here.
Posted by . at 9:12 AM

Email ThisBlogThis!Share to TwitterShare to FacebookShare to Pinterest
Labels: Tributes for BC Paramedic Mike Sorensen