Taylor Bacharch, MP for Skeena-Bulkley Valley has teamed up with Vancouver Island MP Gord Johns to put some pressure on the Federal Fisheries Minister, noting that there has been little in the way of forward momentum for promised federal aid for the fishery first announced two months ago.

As we outlined at the time, the Federal program was to highlight two elements a Fish Harvester Benefit program worth 267 million dollars, and a Fish Harvest Grant program of near 202 million, the Prime Minister noted in May that the details of those programs and changes to the EI program for the fishing industry would be released in the near future ... a period of time that now has reached two months and counting.

In a letter last week addressed to Fisheries Minister Bernadette Jordan, both Bachrach and Johns note that three is little to show from the Feds since the May 14th announcement from Prime Minister Justin Trudeau which promised close to 470 million dollars in funding for fish harvesters.

As part of their correspondence, the MP's note that they have heard from numerous fish harvesters who are wondering when the government will make good on its promise. Adding that they concerned that the details of the program may change between now and the period of time that it is actually put into implementation. 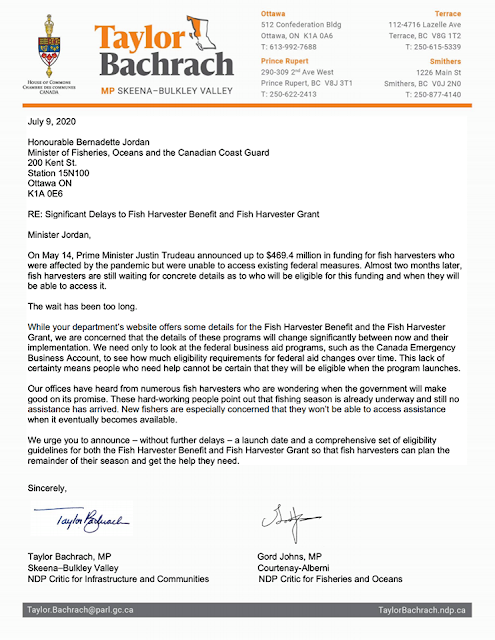 The delay in the delivery of the program comes as the North Coast fishery season, such as it is these days, begins to head towards its final half, so far the opportunities for fishing have been fewer than past seasons and employment levels in the industry continue to be much lower than the more prosperous times in the region.

For more notes on the North Coast Fishery see our archive page here.

Email ThisBlogThis!Share to TwitterShare to FacebookShare to Pinterest
Labels: Delays in federal funding for fishery