Appy Birthday to the Sm'algyaxword App, popular local initiative continues to grow and spread the words of the Ts'msyen

It's been one year since former Charles Hays Secondary Student Brendan Eshom launched a fascinating project for the Northwest, with the creation of the Word of the day website and a follow up initiative of a mobile app designed to expand the knowledge of the language of the Ts'msyen First Nation.

The app offers users the opportunity to learn more about the Indigenous langauge and to celebrate the one year anniversary, Mr. Eshom, now an undergrad student at UBC has added a user contribution aspect towards his work.

To commemorate the one-year anniversary on November 14th, the B.C. Indigenous language advocate has invited the public to suggest words that will be translated into Sm’algya̱x and featured on the web, in apps, and through related social media

"The discipline of choosing and translating one word a day has allowed me to communicate my passion for the language, and has deepened my understanding of my own culture/ I particularly enjoy choosing words that reflect seasonal or newsworthy events, showing how traditional knowledge from BC’s North Coast can illuminate contemporary affairs"-- North Coast Language researcher Brendan Eshom
You can submit your suggestion for Word of the Day here. 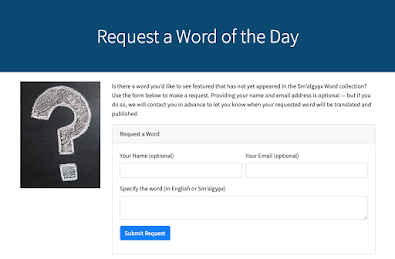 We outlined the passion that he has for the language and the gift of sharing it with the wider community in these notes from last year.
Word of his love of language was also hailed in the BC Legislature last year, when MLA Jennifer Rice shared the details of his extensive efforts with the members of the Chamber.
The website that he designed has progressed through several upgrades and now allows visitors to explore words in a variety of theme categories.
Mr. Eshom also records and uploads a YouTube video for every word, providing its pronunciation, as well as curating accompanying images and example sentences for context.
To complement the website, Eshom launched the accompanying mobile app and text message broadcast service in July 2020.
Select Sm’algya̱x words from the collection are also published on Facebook once a week.In keeping with his commitment to regular upgrades.
Mr. Eshom explains the focus on seeking more input from the community as thus.
"Part of my vision for this project has been to promote dialogue, both in and about the Sm’algya̱ x language. People have all kinds of reasons they want to learn a specific word, and this allows them to share their unique interest with the community of Sm’algya̱x learners and allies."
As a member of the Gitga’at (Hartley Bay) First Nation, Mr. Eshom had immersed himself in the language throughout his years of public education.
To enhance his own knowledge and share his enthusiasm, Eshom obtained approval from the Ts’msyen Language Authority and financial support from Wa̱ p Sig̱atgyet (a department of School District 52) before publishing the inaugural Sm’algya̱ x word of the day: “Ba̱ ’wis” (monkey).
Two words were later added and retroactively assigned to earlier dates: “G̱ ayak” (grey) and “Ha’lila̱ xsits’a̱ ’a̱ x” (November).
From those early beginnings, a most impressive language and cultural resource has continued to grow.
You can learn more about his work from the following resources
Sm'algyax Word of the Day website
Sm'algyax Word Facebook page
Sm'algyax Word Twitter feed
Sm'algyax Word Instagram
Sm'algyax Word YouTube page
The mobile app is available at both the Apple Store and Google Play store.
For more notes of interest from around the Northwest see our Community Notes page.
Posted by . at 10:51 AM