The City of Prince Rupert and Ecotrust Canada will be creating an urban oasis of gardening in the near future, that project getting the green light following the award of 100,000 dollars from the Northern Development Initiative Trust.
The project was announced by NDIT on Thursday as part of a wider release of funding for a range of projects across Northern British Columbia.
$100,000 was approved for the City of Prince Rupert to implement the Northwest Food Systems Initiative pilot project, which will build local food access, literacy and security for social and economic resiliency in Prince Rupert and Northwest B.C.
The Northwest Food Systems Initiative aims to mitigate the economic impacts of a changing economy by enhancing the local food production/distribution network in the region and increasing employment opportunities in the food production sector.
So far, there's not much to share from Ecotrust Canada about what the initiative may look like or where it will be located, though food security has been a bit of a passion for the local group through the North Coast Innovation Lab.
We explored some of that passion in early September, their interest in that pathway was further explored through a recent video that they hosted through their Social media page.
As for Thursday's announcement, Prince Rupert Mayor Lee Brain expanded a bit on the program noting how they will make use of one of the many vacant lots downtown to bring some energy to the city's core area.
“We are pleased to be working with Ecotrust Canada to develop a pilot garden project in the city’s downtown, to both breathe energy into a vacant lot, and build literacy and access around locally grown food. Ecotrust has been conducting significant research and offering supports for similar programming in the community over the past few years, and we are happy to have them leading this project.”-- Mayor Lee Brain on the awarding of 100,000 dollars from Northern Development Trust for a public garden and literacy program in Prince Rupert
The City's involvement in the project was also hailed by Mayor Brain through his political facebook page and his comments on his Social Media page did catch the attention of a few residents.
That forum making for the debating platform as to whether the City is working outside of its core mandate for delivery of service, with concerns expressed that City Council is picking and choosing special interest groups to lend a hand up in a less than transparent way. 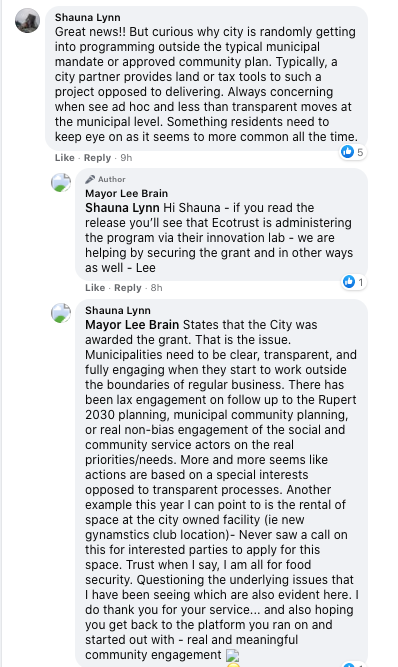 The reference to the rental space for the Gymnastics Club is that of the city's leasing out of recently acquired warehouse space at the Canadian Fish Company plant on George Hills Way to the Prince Rupert Gymnastics Club, that surprise property move was never really discussed in public at City Council.
Recently it was announced that the Wheelhouse Brewing Company would also be taking some of the space from the Warehouse location near Rushbrook Floats.
While they celebrate the goals of redevelopment of a vacant downtown lot, City Council may wish to help clear up some of the concerns from the public that are starting to percolate on a number of their recent moves.
The commentary to the Mayor's page also serves as an early warning for Council that they seemingly are not doing a very effective job when it comes to community engagement and transparency.
You can review more of the past work of Council from our archive page here.
Posted by . at 9:08 AM