Sharp eyed readers of civic communications might have noticed a new name at City Hall from a media release last Friday, with Veronika Stewart now listed as the City's Communication Manger.

The position, which is one of a number recently created jobs with the City of Prince Rupert was first put out for application back in the spring as part of Mayor Brain's planning for Major Projects initiative.

The topic of creating such a position however had its initial genesis back in December when the newly elected Mayor outlined the need to have someone on staff available to direct the City's communication strategy.

And while the City hasn't provided for a media release heralding the new arrival (something that the city frequently neglects), nor has the Mayor offered any public City Council introductions yet for the newest staff member, Ms. Stewart it would appear has joined the ranks of employment with the city from similar duties with the Metlakala First Nation.

Having also served with Mayor Brain on the Board of Directors of Transition Prince Rupert she may be somewhat familiar with how the Mayor works and what his plans are when it comes to moving forward in communicating the city's message.

Among her duties will be managing, developing and implementing the City's communication plan, coordinating marketing and communications projects and providing for the city's media relations activities.

And with the new focus on social media that the City seems to be taking, familiarity with such options as Facebook, Twitter and YouTube were also aspects of the job that were preferred.

There is however, much more on the to do list it would seem, the Full scope of what she's in for as she takes on her duties can be reviewed from the job posting notice of May (click to expand). 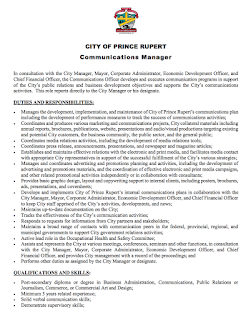 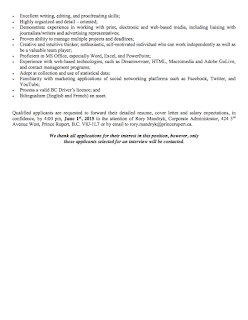 For more items related to City Hall Developments and notes on civic affairs see our archive page here.
Posted by . at 9:21 AM