Dispute between Civic Centre and facility users bubbles over on Facebook

In a facebook post of October 9th, league organizers drew attention to their concerns over new fees recently added for the use of the gymnasium, with league reps suggesting in their note that they had never been contacted about a new policy. Adding that if they want to use bleachers they will have to renegotiate their contract.

With the controversy percolating over the weekend, the post to the Facebook entry provided for a stream of commentary, some of it not particularly favourable towards the Civic Centre, or the City from the league's followers and other interested observers.

Among the commentary, suggestions that the league consider approaching the School District to use School Facilities for their games, as well as a suggestion that organizers consider moving the annual All Native Basketball tournament to another centre, with Terrace one destination mentioned among the online contributions.

As the list of contributors grew through the weekend a note from Mayor Brain made its way into the information stream, with the Mayor noting that he would look into the issue once the long weekend had come to an end. 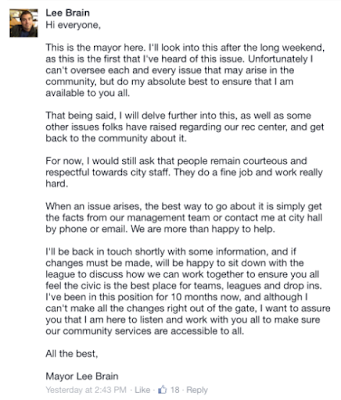 The most recent background on the situation notes that the Mayor was to be asked to facilitate a meeting between the Basketball group and the City's recreation management.

The Mayor advised through his own post that he intends to get back to the community to keep everyone up on the issues that have been raised regarding the Civic Centre.

So far at the midpoint of the week, no further update on the controversy has been provided either to the group's Facebook page or through any of the civic information streams.