With only four days remaining in the 2015 Federal Election campaign, the candidates for the Northwest riding of Skeena-Bulkley Valley are making their final pitches to the voters, hoping to lock in support or sway the wavering as election day beckons on Monday.

Nathan Cullen, the incumbent NDP MP for the region delivered his focus points on Thursday with a mailing campaign to many homes across the Northwest.

His household pamphlet stresses some familiar themes for him, that of his experience as the MP for the region and duties as Opposition Finance Critic and House Leader, it traces some of his legislative offerings to the House of Commons, the range of funding initiatives that he has secured for the Northwest and Haida Gwaii as well as a reminder of a feature in Maclean's magazine of November of last year which hailed him as the "Most Knowledgeable MP"

As for his plan for the Northwest, it features a look at the NDP's plan for affordable child care, as well as his thoughts on how to build the local economy, support communities, protect the environment, expand access to care for veterans and seek more accountability from Parliament.

His position statement from the mailer is a reminder that "As your MP, I've been working with communities and First Nations to rebuild our economy and our sense of hope for the future, but the work isn't yet done. Working together we can create more sustainable resource jobs and protect the environment that sustains us"

As well as the talking points, the flyer offers up some visuals of the candidate both in Ottawa and around the Northwest, as well as in a photo with Federal NDP leader Thomas Mulcair.

You can review the content of the campaign points below: 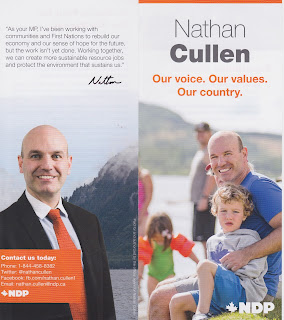 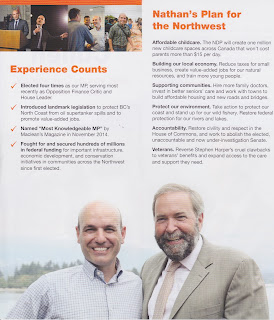 Mr. Cullen's is the third household information sheet to make it into local mailboxes during the campaign, previously Conservative candidate Tyler Nesbitt and CHP candidate Don Spratt offered up their views through the home delivery method.

You can examine our reviews of their offerings as well as catch up on the latest developments from the Northwest campaign from our archive page here.
Posted by . at 8:26 AM