Considering the support for home delivery of mail that some politicians have expressed in recent months, the actual delivery of political messages by mail has not been particularly taxing for your mail carrier during this election campaign.

As part of our coverage of the 2015 campaign we've been providing a look at some of the household mailers that candidates make use of to share their word during an era dominating by social media and electronic advertising.

So far, it's been a pretty thin list of contributions, with only Tyler Nesbitt of the Conservative party having taken to the ancient ways of the household pamphlet to this point.

Somewhat surprisingly, considering his frequent use of the household mailer during the last Parliamentary session, incumbent MP Nathan Cullen has yet to deliver the NDP message by direct mail.

Last week the mailer campaign in the riding increased by one,  as the Christian Heritage Party candidate Don Spratt, provided voters in Skeena-Bulkley Valley with his main talking points for his quest for an office on Parliament Hill.

Among the main themes are a number of positions that would be expected from the candidate and the party, with a focus on the Sanctity of Human Life, Strong Stable Families and Justice and Freedom among some of the key aspects of their presentation.

Other aspects of the CHP message provide for suggestions on how they would approach the Economy and employment, Security and Defence as well as Resources and Environment.

The CHP also provides for a chart for comparison of their position related to the other parties, focusing on five policy issues of Abortion and Sanctity of Life, Marriage, Israel, Carbon issues and National Debt.

There's little in the way of personal information when it comes to Mr. Spratt, who as he outlined last week during the Prince Rupert Election Forum had been "parachuted" into the riding at the last minute owing to the departure of Rod Taylor to seek a seat for the party in Ontario.

About all we learn about the candidate from his mailer is that he and his wife Gloria  have spent over thirty years calling for the abolition of abortion in Canada,  as well as his call for the restoration of freedom of speech, conscience and religion for all Canadians.

He also refreshes our memories on the founding principles of the Canadian Charter of Rights and Freedoms, adding some of the CHP's interpretation of what the primary responsibility of civil government should be.

You can review the full presentation below. 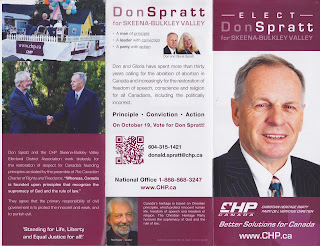 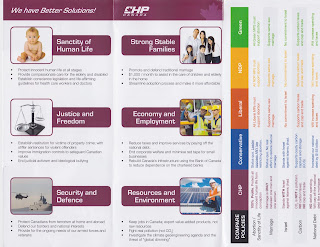 Should the other candidates deliver their information sheets to a mailbox before the Monday vote we'll offer up the final review of their work as well.

For more background on the most recent developments in the 2015 election campaign see our Election Archive page here.