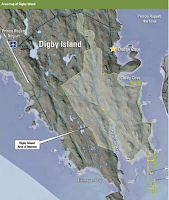 As part of the process for development of a proposed LNG terminal at Dodge Cove by Aurora LNG, Nexen Energy, the Canadian company owned by the Chinese energy giant CNOOC, was required to seek comments related to their proposal, an initial engagement effort that came to a close on October 1st.

This month the Environmental Assessment Office in Victoria provided the first look at some of the feedback that their community engagement process delivered, with the publication of the contributions received from Public Comments phase of the process.

The Thirty six page document which compiles the comments provided to the EAO from September 1 to October 1st, features the comprehensive submission from the Gitga'at First Nation, as well as a large collection of contributions from residents of the Dodge Cove region, as well as observations from current and former residents of Prince Rupert.

The volume of commentary also includes contributions from residents of other communities of the Northwest, the province and across Canada, some with a personal attachment to Digby Island, while others appear to have concerns about LNG development in general.

And while the majority of their comments related to how the project may impact on their population, of interest for residents of Prince Rupert was their interest in learning more about the effect that the large scale industrial project would have on the cost of living in Prince Rupert and the surrounding reservations near it.

"It is not clear how the change in cost of living will be measured and assessed. Cost of living should be measured under economic conditions. Currently the cost to attain a contractor to do work in Prince Rupert is inflated and contractors are very hard to attain. This in part is being fueled by speculation. Such issues will only get worse if major projects go ahead. The increased cost of living (e.g. cost of labour) for Prince Rupert as well as residents of nearby reservations should be assessed in the Application." -- One item of a lengthy submission by the Gitga'at First Nation as part of the Draft Application Information Requirements phase of the Aurora LNG Terminal proposal

The majority of the comments from the others that made submissions express a wide range of observations when it comes to the proposed Terminal among them:

The belief that the project is located too close to those that live on Digby Island and in particular the Dodge Cove area of the island.

Concerns related to marine and plant and wildlife of the were also listed among the issues of concern related to the proposed development site.

One submission perhaps suggests of a potential issue to come for the Aurora proposal, with concerns related to eel grass situated near Digby Island, a topic that has become a major factor in discussions related to the proposed Petronas development for Lelu Island.

"People don't come to Prince Rupert to see LNG facilities causing major health concerns for people, they all come from Alberta to sports fish. I believe the eel grass on digby island is vital to the estuary of the skeena River, and should not be transplanted anywhere." -- Environmental concerns were common throughout the comments related to the proposed Aurora LNG project

The loss of access to trails and beaches on Digby Island was also theme, with a further concern added over the growing pace of the loss of green space and waterfront access that many of the industrial proposals for the Prince Rupert region are delivering to the community.

"It seems like every time big industry sets up operations around the Prince Rupert area we loose green space and access to beaches and trails, none of which are ever replaced. The lose of public access to beaches and trails reduces the quality of life, and is making Prince Rupert not such an attractive place to live or raise a family." -- An observation among thirty six pages of comment as part of the Draft Application process for the Aurora LNG Terminal development.

The anticipated noise of the construction phase of the proposed terminal, as well as the volume of workers to be based on the island during that construction also was a topic of note among the contributions.

"This proposal will ruin the community's way of life and could even be a threat to the inhabitant's lives. Just look at a map with the layout of the proposed terminal and the accompanying camp and ancillary buildings. Anyone can see it is too close. It isn't necessary to know that it does not meet international siting standards for an LNG plant, to reach this conclusion, it should be obvious. I feel for the people of Dodge Cove." -- From a submission to the comments phase for the proposed Aurora LNG development on Digby Island

Others express concerns related to the dangers that they believe LNG terminals pose if located close to urban areas, as well as the potential for disruption to the entire harbour area should an incident take place either at the terminal or on approach towards or departure from the facility.

Some wrote to say that they don't have any issues with the development of LNG resources in the province, but added that in the case of the Aurora project, they belief that it is being proposed in the wrong location.

In total, thirty four submissions of varying length and content, were presented to the EAO during the thirty days available for comment.

Neither the City of Prince Rupert, or Skeena-Queen Charlotte Regional District provided a submission as part of the month long comment period.

The Draft Application Review is the start of the lengthy environmental process required when it comes to LNG development in the province, further engagement sessions and information will be delivered as that process moves forward.

You can review the full archive of submissions to the Draft Application process here.

The full list of documents related to the Aurora LNG project can be found on the EAO Project Information page here.

For more background related to the proposed Aurora LNG terminal development see our archive page here.
Posted by . at 10:17 AM