Council hears of request for extended transit hours in community

Prince Rupert City Council may soon be approaching BC Transit to consider extending the hours of service for the city's transit system, a topic that became part of the discussion at Monday's City Council session.

The prospect of increasing the hours of operation for bus service in the city was tied into discussions that came out of  a recent session of the City's recreation commission, which noted that increasing access and use of the city's facilities is something that could be boosted with a longer schedule into the evening.

At the moment, the four regular Prince Rupert routes all feature a schedule which stops for the night sometime towards the  6:30 mark from Monday to Thursday and on Saturdays, with service extended to the 10 PM mark on Fridays. 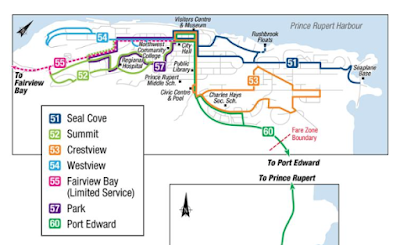 No indication as to how much longer that the City might wish to see the transit hours extended to was provided during the course of the discussion at Council on Monday night.

Mayor Brain noted that the proposal from the recreation commission was something that the city's corporate administrator should follow up on.

You can review the  two minute conversation on Transit from the City's Video Archive, it starts at the one hour seventeen minute point.

Email ThisBlogThis!Share to TwitterShare to FacebookShare to Pinterest
Labels: Council hears of request for extended transit hours in Prince Rupert