With a couple of projects now under way for the City of Prince Rupert's infrastructure program known as Re:Build Rupert, the City has decided the time is here to offer up an update page for the status of some of the investments in the city's roads, sidewalks and other items of note.

The update of projects listings debuted yesterday with a spot on the City Council page of the City's website.

Offering up some notes on some of the current projects taking place, such as the 3rd Avenue Sidewalk rehabilitation program, a sewer project at Seal Cove and Bellis Roads and work on a retaining wall at Seal Cove Circle all getting the spotlight for the month.

And while he doesn't get a shout out in the first edition of the new information plan, a couple of projects that got their start during the final year of Jack Mussallem's term as Mayor get listed as well.

With the Fraser Street renewal project, Rushbrook Launch Improvements and the Landfill expansion project all making the Re:Build Rupert update listings for the end of October. 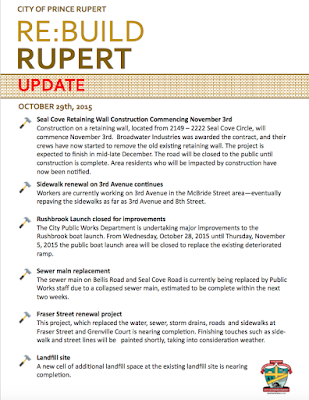 And while it's good to see the City keeping its residents up to date on the new era of infrastructure improvements, perhaps adding the cost of each project would give us all and idea as to how much such major projects take out of the civic budget.

Even better would be a chart included on the city website, in order to follow each project, allowing for comparisons of start and completion times and projected cost as opposed to the final bill.

Still, it's a good start to the concept of frequent updates, though there's no indication in the initial edition as to how often those updates will be added to the city's flow of information.

Email ThisBlogThis!Share to TwitterShare to FacebookShare to Pinterest
Labels: Re:Build Rupert updates from the City