Deleted emails case turned over to RCMP for investigation 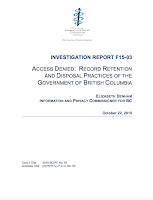 The case of the missing highway of Tears related emails has been turned over to the RCMP for further investigation, after the office of the Privacy Commissioner released a report on Thursday taking the provincial government to task over a number of its practices on the theme of information.

The disappointment of Privacy Commissioner Elizabeth Denham becomes apparent fairly early in the report, which outlines the many concerns that she and her staff found when it came to how the Province handles the flow of information and archival procedures.

"I am deeply disappointed by the practices our investigation uncovered. I would have expected that staff in ministers’ offices and in the Office of the Premier would have a better understanding of records management and their obligation to file, retain and provide relevant records when an access request is received." --

One of the key investigations from the office involved the inability of the government to produce a number of emails related to meetings held on Transportation issues on Highway 16/Highway of Tears concerns.

After a full review of the situation and expressing some serious concern at how the Ministry of Transportation handled the incident, the report detailed how a Ministerial assistant, George Gretes had failed to tell the truth under oath regarding his involvement when it came to the deletion of emails.

That incident has now been referred to the RCMP for investigation.

The Privacy Commissioner's report makes for a collection of concerns and censures when it comes to government attitudes towards information handling, showcasing an inability to even back up data, let alone file important correspondences, or respond to freedom of information requests.

Through the course of the scathing 65 page report, the Privacy commissioner's office examines the entire process of how the Government handles information requests and delivery of information, offering up a number of recommendations to address many of the concerns that it has flagged.

Ms. Denham wraps up the overview with some helpful advice for the Premier, her Ministers and the bureaucrats that oversee the information process in the province.

In the face of severe challenges lies an opportunity for government and for British Columbians. Government can make the necessary changes to legislation as well as to policies and processes that would help regain public confidence and establish our province as a national and international leader in access to information.

For this to take place government has to demonstrate, through immediate and meaningful action, its will to ensure a government-wide culture of respect for citizens’ access to information rights.

You can review the full report and recommendations from the Office of the Privacy Commissioner here.

Technology, Innovation and Citizens’ Services Minister Minister Amrik Virk responded for the Provincial Government, outlining their plans as to how they would approach the recommendations made from the report.

Though the first steps from the Liberal government are a bit puzzling, with the first reaction that of bringing in a second opinion.

That will come by way of David Loukidelis the former B.C. information and privacy commissioner, with Mr. Loukidelis asked to advise the government on how to address the recommendations.

This item from the blog from May of this year will help to refresh your memory on the Missing emails and correspondences from related to the Highway 16 meetings, a topic that North Coast MLA Jennifer Rice followed up a number of times in the Legislature through last fall and into 2015.

Not surprisingly, the release of the report on Thursday made up much of the content for Question Period today in the Legislature, with the NDP opposition targeting many of their questions and observations towards Premier Christy Clark.

You can review the full exchange during question period from the Legislature minutes and video files  from the Thursday morning session, the questions and observations begin at the 10:30 mark.

The heated discussion of the day in Victoria provided for a number of items from the province's media options, some of the best of those offerings can be found below: