They'll be renewing their subscriptions to Maclean's all across Prince George today, with word this week that the annual Universities edition of the Canadian news magazine had delivered  impressive grades for the University of Northern British Columbia.

The Prince George based university, which has attracted growing numbers of post secondary students from the Northwest since it opened twenty five years ago, was rated at the top of the list for Small Universities in Canada, in the Primarily Undergraduate Category.

“This recognition from Maclean’s only supports what the residents of Northern BC already know - that UNBC provides a first-rate education and a foundation for the development of the next generation of leaders for our region, our province and our country,”  ... “The dedication of our faculty and staff, the achievements of our students and alumni, and the generosity of our donors all contributed to this tremendous accomplishment.” -- UNBC President Dr. Daniel Weeks celebrating the Universities achievements from the 2016 Maclean's University rankings

There are however some areas where room for improvement was noted, the universities residences brought a lower mark owing to their age at 25, while the student graduation rates brought the University down a few marks overall. Though in comments for the Prince George Citizen, UNBC officials noted that some students may start their post secondary life in Prince George, but a number do transfer to other universities during the course of their studies.

UNBC acknowledged their success with a media release issued on Wednesday.

Northwest Community College was quick to offer up its congratulations to their partner in education of Northern British Columbia, taking to their twitter feed to salute the achievement. 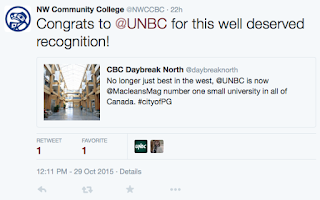 You can review some of the findings from the 2016 Rankings from Maclean's here.

As might be expected, the good news for UNBC was quickly shared around the region by the various Prince George media outlets, some of their work can be found below:

Email ThisBlogThis!Share to TwitterShare to FacebookShare to Pinterest
Labels: UNBC claims top spot in its category in Maclean's university review