A change in the menu for Prince Rupert's diners, as Aroy D set to offer Thai cuisine 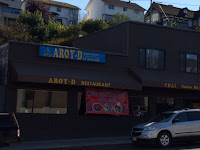 The ever changing food scene on the North Coast finds a new taste temptation on the horizon, as the prospect of Thai cuisine appears to be close at a Third avenue restaurant.

Signs recently went up in front of the old Fairview Restaurant, haling the upcoming arrival for Prince Rupert, with the menu selection set to shift from Malaysian to Thai, now under the banner of the Aroy D.

We first noted the prospects for Aroy D back in May, when the owners had first indicated that the Rupert Square was going to be their destination.

The location that they have now selected had previously been used by the Wau Cafe, which offered Malaysian cuisine, however the restaurant which opened in the fall of 2015 quietly seemed to fade from the dining scene earlier this year.

Those that may be looking for omens on forward movement for LNG plans, are probably hoping that the shift of the dining front, is not an indication that another Malaysian option for the region may also fade from view.

There's no timeline noted for the Third Avenue location, though an Opening soon sign is in the window of the Aroy D, indicating that another Southeast-Asian food experience may not be too far down the road for Prince Rupert.

The owners have also created a Facebook page, which provides a look at the menu for when the doors open and new dining experiences can begin.

You can find more background on the city's commercial sector from our archive page here.
Posted by . at 12:02 PM