With 75,000 dollars in grant funding in hand from the Northern Development Initiative Trust, Prince Rupert City Council will once again be looking for community feedback on design plans for a number of areas of the City.

As we outlined on the blog yesterday morning, included as part of the Agenda for Tuesday night's Council session was an announcement stemming from an August Closed Session of Council, noting that the City had awarded a contract to the Planning Partnership, a Toronto based national urban design firm.

On Wednesday afternoon the City provided a bit more background on that contract award. Delivering their update through a media release, the city explained the scope of the new initiative which would seek to change the look of many areas of the city, as well as the amenities available for City residents.

For his part, Mayor Lee Brain highlighted the community engagement aspect of the plan as it prepares to move ahead.

“This exciting new initiative is the beginning of making public spaces and commercial areas more inviting which will ultimately contribute to a better quality of life and significantly enhance our local economy,”  ... “We’ve heard for a long time that this is what Rupertites care deeply about and now is the time for residents to think big and participate in helping redesign the face of our community spaces.”

The areas that will be addressed as part of the wide ranging overview will cover the Third Avenue Downtown core area, Seal Cove and the waterfront properties that the City currently holds.

The process that the Planning Partnership group brings to the conversation, will be included as part of the larger efforts of the ongoing Redesign Rupert program.

That initiative which is coordinated through the Community Development Institute at UNBC has been set  up in the city for over a year now, hosting a range of consultation sessions with city residents. 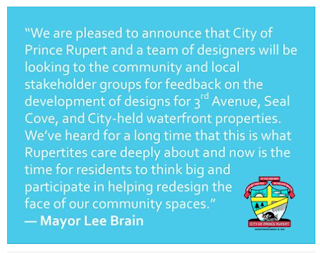 No firm date was set for the first public meeting between the Urban Designers from the Planning Partnership, civic officials and city residents; though late November appears to have been targeted for the planned community session.

As well, no timeline towards the future, related to this latest civic initiative was released through today's announcement.  And other than the amount of the grant funding from the NDIT, no estimate was provided as to the cost of the contract, or how much funding will be required for the range of consultation efforts that will soon be underway.

The media release did however indicate that the implementation of any design plans will require that the City make additional efforts to secure financing, develop complimentary policy and well as seek the buy and support from the Third Avenue area and other targeted areas.

You can check out some of the work of the Planning Partnership in other communities across Canada from their corporate website.

More items of interest related to City Council can be found on our archive page here.

Email ThisBlogThis!Share to TwitterShare to FacebookShare to Pinterest
Labels: Background released on city initiative with the Toronto based Planning Partnership