Many themes reviewed by delegates at UBCM last week 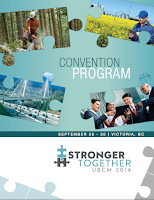 As the Prince Rupert delegation to the 2016 UBCM convention settle back into their daily chores down at City Hall, they will no doubt have some notes to review from their five days of networking and session attending that marked the annual political festival for British Columbia municipalities.

There were a number of themes that made for the week, as municipal leaders and staff members from across the province worked their way through an ambitious agenda.

Housing issues and concerns over homelessness proved to be a highlight topic of the week, with a number of communities making it one of their key talking points through the week.

Community, Sport and Development Minister Peter Fassbender provided a dark cloud for an otherwise sunny week for the delegates when he weighed in on the theme of the municipal finances and the increases that many communities have made to their municipal work forces over the last few years.

To help move the conversation forward for convention delegates, the Minister offered up a guideline for municipalities when it comes to dealing with pay packages.

Something which proved to be a discussion paper that didn't receive a warm welcome from the delegates, who noted that they have rejected the prospect of a debate on the issue in the past.

It is a topic that perhaps the City of Prince Rupert might have found of some interest, considering the significant increases in the municipal employment rolls for Prince Rupert since Mayor Brain and the current council took office in 2014.

Infrastructure concerns were high among the discussion topics for municipal leaders as the week moved forward, with local government officials pleased to hear the terms of a new Federal/Provincial agreement which delivers a formula for water and wastewater upgrades that will see the Federal government provide 50 percent funding and the Province of British Columbia to provide 33 percent.

Making the prospect of moving forward with some high priced projects more enticing for municipalities across the province which have access to the remaining 17 percent that would be required.

The convention closed with an announcement that identified the 35 communities which had been selected for the first wave of funding with Burns Lake and Fort St. James the sole representatives on the list from the Northwest.

A second intake of applications is currently underway and will come to an end on November 23rd, rewarding those communities which have their finances in place to participate.

Another topic that was up for discussion last week was the theme of dangerous dogs across the province, something which became the theme of a recent Prince Rupert Council session, with concerns raised by a member of the public during the course of the meeting.

The municipalities outlined their next course of action on the issue.

In the Northwest, civic officials from both Kitimat and Terrace have offered up some thoughts from how they believe the week of municipal networking went.

While there have been some snapshots and a few twitter shout outs from a few of the Prince Rupert delegates to the convention, so far there has been few updates, or statements from the Prince Rupert team at UBCM 2016 when it comes to what they may have absorbed, or what topics resonated for them during their time in Victoria.

An opportunity to share with the community will come up next week, when City Council members host their first Public Council session following their return from the convention, that council session is scheduled for October 11th.

You can review our full archive of items from this years convention here.

Email ThisBlogThis!Share to TwitterShare to FacebookShare to Pinterest
Labels: Themes from UBCM 2016