Move over Carolina and George! There are some new story tellers on the media beat!

It might be time for Prince Rupert's popular media pairing of Carolina de Ryk and George Baker at the CBC Daybreak Studios to knuckle down and up their game, there's some more competition in place now when it comes to the storytelling title for the North Coast.

On Wednesday, the Northern View debuted it's latest approach to catch the attention of its readers (viewers?) across the North Coast, introducing it's first Podcast for a new venture known at Northern View this Week.

It's a project which features Tyler Portelance and Kimberly Godfrey, two sales consultants from the city's MacCarthy GM dealership discussing a number of items that they have discovered while going through the weekly paper.

The Podcast debuted on Wednesday and featured Keith Lambourne, a Prince Rupert real estate broker and President of the Prince Rupert Chamber of Commerce as their first guest.  He and the hosts weighed in on the prospect of LNG development for the North Coast and how it could change the economic picture for the region.

The new pair of the Podcast, also highlighted other stories from the weekly paper, featuring a number of video clips to take note of the items that they found of interest over the week.

If the final credits are any indication, that video gathering process is one that seems to have put the entire team at the paper to work at, as they look to provide content for the new feature. 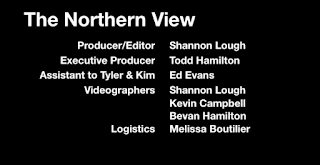 You can review the debut podcast of  Northern View This Week here.

Having watched the project a couple of times now,  we're not sure if the weekly paper is channeling the vibe of Jerry Seinfeld's video conversation project of Comedians in Cars Getting Coffee, or if it's a homage to the ancient days of Wayne's World.

But one thing is certain. We are pretty sure that at journalism programs across the nation, the radical concept of having correspondents from the automobile sales and real estate sector delivering the news and providing editorial content, is not a blue print for the future of news that anyone saw coming.

The first Podcast ran about sixteen minutes and included two commercials for the local auto dealership.

All of which remind us with some fondness of some of our other favourite commercial breaks through the years.

More notes on developments with the media of the Northwest can be found on our archive page.
Posted by . at 9:05 AM