Kitimat and Terrace continue to reign as the hot spots in the Northwest when it comes to real estate heading to the fall.

With the latest results posted by the BC Northern Real Estate Board providing a snap shot of some of the speculation that was underway with just the prospect of LNG development for the Kitimat region.

By the time the BCNREB next does it's final quarter review in December, the real estate picture will surely have seen a significant spike upwards in both of those communities, especially now that LNG Canada has announced its decision to move forward with their LNG terminal project in Kitimat.

When it comes to moving a house on the market, Terrace is the place to be in the Northwest, with properties changing hands in less than forty five days on average.

For Prince Rupert the results found sales on the decline, while the volume of listings is on the rise for the year so far, with sellers in the city finding it takes close to 80 days to close a deal.

In the remainder of the Northwest, Smithers saw a decrease in sales, while Terrace and Kitimat saw increases in sales compared to a year ago.

BCNREB President Court Smith noted that the economy remained strong for the region with the renewed confidence holding the market steady for the most part.

"The economy in the north and north central regions of the province remains strong and the recent LNG announcement will hopefully renew confidence for consumers in the Peace region. BC Northern real estate markets overall have been steady and doing well when compared to the southern areas of the province.

Thanks to a strong economy, most markets in the Board area have been somewhat immune to the negative effects of the mortgage stress test apparent in the lower mainland; and while tight inventories have pushed up the prices in some areas, BC Northern remains an affordable market.”

The review of communities across the Northwest looks as follows:

On average it took the homes 79 days to sell a property in Prince Rupert.

As of  September 30th there were 191 properties of all types available for purchase through the MLS option in the area. 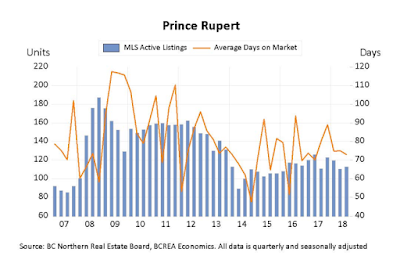 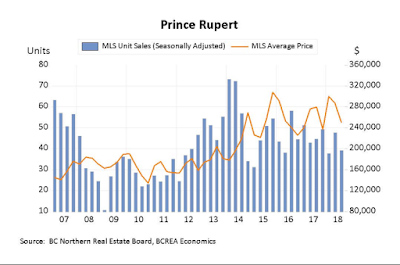 At the end of September, there were 199 properties of all types available for purchase through MLS in the Terrace area.

Kitimat has been another hot spot for realty for the first three months of 2018, 137 properties worth $33 million had been sold through MLS to the end of September, compared to  73 properties worth $15.6 million at this time last year.

14 half duplexes and 17 town homes have been sold so far this year in the Kitimat market.

At the end of September, there were 94 properties of all types available for purchase in the Kitimat area.

Heading east, Smithers continued to see an increased pace from 2017, with 202 sales reported in the first nine months of 2018 to a total value of $61.3 million dollars. That compares to the results from this time last year when there were 217 sales made worth $56.7 million.

As of the end of September, there were 160 properties of all types available in the the Smithers area through MLS.

A snapshot of the Average Selling prices across Northern BC to September of this year looks as follows:


The full review of the entire Northern region, including an expansive overview of the largest city in the north in Prince George can be found here.

For items related to the real estate sector on the North Coast see our archive page here.

As well, a look at our weekly real estate listings is delivered to the blog every Monday morning, when we offer up our Real Estate Tracker reviewing the ten listings asking the highest amounts from the city's three main realtors.

To return to the most recent blog posting of the day, click here.
Posted by . at 10:48 AM