While the boiling has stopped, Water Quality Advisory remains for Prince Rupert, with few updates heard since 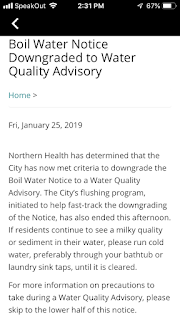 It's been two weeks since Prince Rupert City Hall advised that the majority of the city's residents could take a break from boiling their water for household use, sharing word of the change from the  Boil Water Notice of mid December, to that of a Water Quality Advisory.

A just in time declaration after close to six weeks of boiling water that seemed to defuse some of the percolating concerns that were being heard in the city, not only about the state of the city's water but about the approach that the city had taken towards the issue and the way that the public had been kept informed.

At the January 28th Council session, the topic of the Water situation did make for a presentation from a member of the public Tom Kertes, who had founded a community group, Community for Clean Water in response to the water situation.

And with the change in status of the Water notice and some follow up meetings with City Council members prior to the January 28th session, his presentation took on more of collegial discussion on the issue, compared to what might have been the case had residents still been boiling their water towards the end of January.

At the same Council meeting, residents heard of plans by the city to have staff conduct a provide a post action review to examine the city's response to the situation and some of the concerns that have been heard related to it.

Awaiting that staff report to be delivered, is where we are at the moment when it comes to any kind of update on the current state of the city's water supply.

Since January 25th,  The Water Quality Advisory remains in effect, but no further notes related to the testing schedule, or results from them have been offered up  by the City for the public to review since the Mayor shared his good news on the Boil Order Notice that same day.

One result of the Original Boil Water Notice of Mid December, and the subsequent placement of the City under the Water Quality Advisory seems to be that of a growth industry in the purchase and installation of water filtration units for local supply stores and plumbers.

As those in the community who can afford such UV units, vote with their dollars it seems on their confidence in the city's current water status, by installing their own home units.

Last week we noted how the Nisga'a Lisims Government had responded to a call from the local Gitmaxmak’ay Nisga’a Prince Rupert/Port Edward Society towards putting in place their own program for Nisga'a residents in the Prince Rupert urban area.

The NLG  program provided for approval of the purchase and installation of a commercial grade reverse osmosis filtration station for the Nisga'a hall on Third Avenue West.

As part of their response for members, the Nisga'a also have purchased a supply of large water jugs for rotation among elders and any others that may need assistance should the need arise again in the future.

The Nisga'a response was a strong approach to a local situation and one that might leave local residents outside of the urban Nisga'a membership to wonder what steps the City might have been able to take to help out local residents who had similar needs or concerns.

That perhaps might make for a chapter in the staff review, whenever it is delivered to City Council and hopefully posted to the City website for review from Prince Rupert residents.

Until then, a few updates to that same information portal might be welcomed by residents in order to help them stay informed, not only as to the current status of the city's water supply, but as to whether conditions are improving at all.

As it is, the current approach to information sharing from the City seems to be one of out of sight, out of mind ...

However, considering the importance that the water supply has for local residents, some kind of an ongoing review of the current situation should be part of the city's information stream.

If for no other reason than to give us all some indication as to whether a Water Quality Advisory is now going to be a somewhat permanent status for what appears to be an indefinite period of time.

You can review some of the past notes from the city's water woes of the last two months from our archive page here.

More notes related to discussion topics from City Council can be explored from our Council Discussion page here.


To return to the most recent blog posting of the day, click here.
Posted by . at 12:20 PM