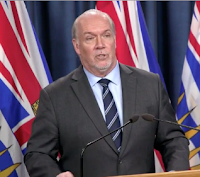 British Columbians will be living under a Provincial State of Emergency for another two weeks, that as Premier John Horgan hosted and information session on Wednesday to outline some of the results of the sacrifice of those across the province.


“Through this challenging time, British Columbians are leading the way in our efforts to stop the spread of COVID-19. We are starting to see the results of our sacrifice, dedication and hard work, and we must continue to be steadfast in our commitment to keep our communities safe – for ourselves, our loved ones and our workers on the front lines.” -- Premier John Horgan

In his comments the Premier noted of the success so far of the new border orders, thanking both provincial and Federal workers for that success, observing that to this point only 84 of the 4,700 travellers who returned to the province requiring quarantine under Federal supervisions.

In the Question and Answer portion of the session, the Premier noted the progress that has been made in supplying the required protection equipment for medical and front line care providers.

He outlined the indicators that will allow the province to move towards a recovery program, noting the areas of education and health care as two areas where they will be looking towards finding some semblance of normalcy.

Though Mr. Horgan noted that BC won't follow the lead of other provinces with an arbitrary date to resume classes, but instead will make their decisions based on the advice of Dr. Bonnie Henry and other health and education officials.

The Premier also took note of the approach the province has taken amid calls for lockdowns from a number of communities (which included Prince Rupert and area).

"When it comes to other elements of the economy, what we've been trying to do ...  is to not shut down everything.  There was a lot of talk about lockdown this, and lockdown that.  Other jurisdictions used that language and then they published their exemption lists which were sometimes pages long.

Because of our early start to prepare for the pandemic, I think we'll be in a better position when the restart happens, but that's part of what the Economy Recovery Task Force is talking about weekly"

On recent calls from some municipalities and organizations for some financial assistance during the COVID-19 emergency, the Premier highlighted the work of Minister Selina Robinson towards the challenges that are being faced and how the province is addressing them.

"That's a challenge that Minister Robinson has been working on regular contact with the broader Union of BC Municipalities the umbrella group for all municipalities in BC, Regional Districts and others. But she's also been going mayor by mayor, region by region, hearing peoples concerns hearing their needs and we're developing proposals that Minister Robinson and Minister James will be talking about later in the week that will be helpful"

For areas of British Columbia that have not seen much in the way of new cases during the COVID-19 outbreak the Premier noted how the provincial government continues to engage with health authorities such as Northern Health and others to receive the latest data.

From that review,  provincial officials continuing to gauge the situation in each area and how that could inform them towards amending in the future for specific areas of the province in the approach the province has taken as part of the response.

On the theme of non essential travel, the Premier did say that if stronger action is required the province will take it, but to this point he believes that the signals have been that people get it but he's keeping on top of the situation.

"If we need to take stronger action than the scorn of your peers we'll do so, but I believe at this point and I look at the data from the weekend, and the example of course of BC Ferries. 92 percent reduction in travel over the long weekend, that's a signal that people get it that's a signal that people understand it ... If we need have stronger measures we will, we extended the Provincial State of Emergency today. Mr. Farnworth will develop those with other public safety deliverers across the province"

In an information release that accompanied today's announcement, the government outlined some of the measures in place under the Provincial State of Emergency towards delivering on British Columbia's response to the COVID-19 emergency.

You can read those notes here.

The extension of the provincial state of emergency is based on recommendations from B.C.’s health and emergency management officials. Minister Farnworth made the original declaration on March 18, 2020, after Dr. Bonnie Henry, provincial health officer, declared a public health emergency the previous day.

The full information session can be reviewed below:


For more notes related to the Provincial response to COVID-19 see our archive page here.
Posted by . at 3:35 PM

Email ThisBlogThis!Share to TwitterShare to FacebookShare to Pinterest
Labels: BC extends Provincial State of Emergency to April 28