It's been an unusual election period for Prince Rupert based Northern Savings Credit Union; with the timeline of weighing your options and making your decisions one that for the most part took place in a virtual setting over a physical one.

Still, the election date was fixed for early April and today, Northern Savings released the names of those who found success at the ballot box, such as the ballot box was ...

As we noted in mid March, Northern Savings outlined the nature of the online voting process, while the actual balloting got underway on March 27th.

Elected to three year terms following the results of the April 8th vote were:

In Prince Rupert, the margin of victory for Mr. Ciccone over Mr. Tony Briglio was 9 votes in the Director vote.

It was double dose of disappointment for Mr. Briglio in the Director at Large vote, with Syvlan Augert topping him by 12 votes

A much wider margin for Rodney Cox was found in Terrace with the next closes candidate 38 votes behind.

The full account of the voting totals can be found below: 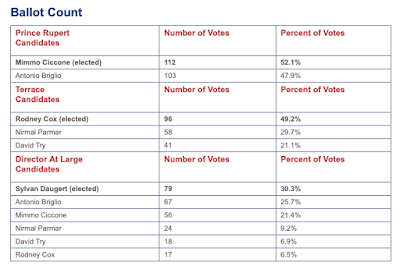 For more notes of interest on the region's commercial sector see our archive page here.

Email ThisBlogThis!Share to TwitterShare to FacebookShare to Pinterest
Labels: Northern Savings Board of Directors results 2020