Councillor Cunningham calls for return of Committee of Whole sessions; seeks feedback from community on how to achieve that process 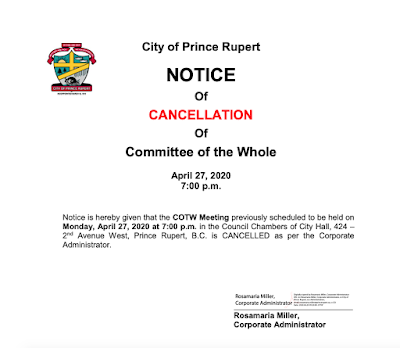 As Prince Rupert's City Councillors return to their public duties tonight with their first Council session since March 23rd, Councillor Barry Cunningham has once again raised the theme of the public comment opportunities of the Committee of the Whole process and how the cancellation of the once a month session is something his fellow Council members need to review.

As we noted on Friday, the City Council members have been rather quiet on the political front since that last session of late March, with few public comments on any themes in the wake of their now suspended local state of Emergency.

The lack of public governance and the choice of modes of communication from Prince Rupert City Hall was a theme that CBC Daybreak's Andrew Kujarta explored in a Friday evening Twitter thread, as he made note as to how many other communities have managed to conduct civic business in the same period of time, some even adding on to the council schedule to address civic business.

For Prince Rupert, in addition to the cancelled Regular Council session of April 6th, the local council has once again cancelled the Committee of the Whole process having barred the public from attendance tonight owing to their take on the Provincial Orders of the Provincial State of Emergency.

For Councillor Cunningham at least, the ongoing cancellation of the Committee of the Whole is a bit of a troubling decision and on Friday he made use of his Social Media page to offer up some guidance to the Council membership, as well as to make a call to the public to help craft some alternatives to the process.

As Mr. Cunningham notes in his social media message, the Committee of the Whole is an important element of local governance, offering as it does the only actual opportunity for the public to communicate directly with the Mayor and Council and raise questions or concerns on issues of note. 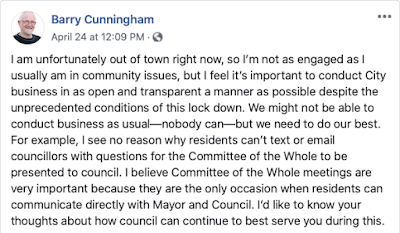 So far, he is the only Council member to speak to any of the recent issues from City Hall.

While many of the other council members do have social media platforms; for the most part they have kept whatever thoughts that they may have on civic issues to themselves.

It's not the first time that Mr. Cunningham has had to make the case for the Committee of the Whole process, and at times it seems as though he is the sole guardian towards the process that allow for public contributions on a monthly basis.

To contribute your thoughts on the topic for the Councillor, see his post from his Facebook page and leave your suggestions in the comments area below.

While Prince Rupert has for now chosen to keep their meetings closed to the public, the ability to hold meetings and allow for public participation while challenging for some Northwest communities, has found some work arounds.

Telkwa which had to scrap broadcasts of their council sessions twice, has decided to meet in a larger venue, to allow for public participation while making for social distancing provisions.

Smithers notes that Council meetings are still open to the public although space is limited as they have reconfigured the council chamber.

Kitimat has introduced a form of public contribution, by asking for calls or emails prior to the meeting and then bringing those wishing to speak to Council in by way of video conferencing.

Perhaps in addition to the themes from Councillor Cunningham on the state of the COW cancellations,  those public access options could make for a discussion topic for Prince Rupert Council tonight.

More notes on this evenings Prince Rupert Council session can be reviewed here.

A wider overview of past themes at Council can be found here.
Posted by . at 10:24 AM

Email ThisBlogThis!Share to TwitterShare to FacebookShare to Pinterest
Labels: Councillor Cunningham on Committee of the Whole concerns