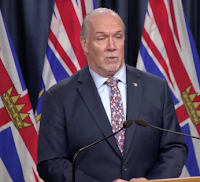 British Columbia Premier John Horgan met with the provincial media this afternoon, taking questions towards a number of themes, while telegraphing some news of a spike in the daily COVID numbers to be relayed by Doctor Bonnie Henry and Health Minister Adrian Dix.

The Premier offered up a theme of hope for the future, celebrated the work of those dealing with the elements of the COVID issues in present times,  while reaffirming the need to stay the course to keep the progress found to date intact.

The early portion of the availability was a recap of many of the programs rolled out by the Provincial government and how the Province has responded to the health crisis to this point.

Towards the need to equip front line medical officials with Personal Protective Equipment the Premier noted that BC continues to have success in its efforts to access PPE and progress across Canada:

"There are manufacturers that are emerging across the country, I talk to Premier Doug Ford, which has often been characterized as the manufacturing heartland of Canada, largely because of autos but now they are retooling to meet the needs of today and I'm very pleased with the progress that's being made there, I get updates regularly from Premier Ford. But right here in British Columbia, companies are now retooling to provide the PPE the protective equipment that we'll need not just in acute care facilities, not just in long term care facilities but across the economy"

An expansion of the province's broadband network was part of the Premier's themes on both the delivery of education and health services, particularly now that education is working towards a virtual delivery program.

As part of the expansion, the Premier noted that he has instructed Citizens Services Minister Anne Kang to accelerate resources towards the broadband initiative into rural and remote communities.

"This ties in nicely with the announcement that we made around health delivery in rural and remote communities that the isolation, the distances of British Columbia are vast and they are made all the more vast when we think about the challenges of accessing services in a time of pandemic, so this has been a wake up call for all of us ... "

Towards a path for the future, the Premier noted that he plans to offer an update for British Columbians in May as to how the Province opens up, though cautioning that we need to be guided by science.

"I think the public can expect that I'll have something to say about how we open up, sooner than the middle of May, but we need to be guided by the science. And although as I said in my opening remarks we've seen some very positive indicators in the numbers that Dr. Henry presents daily and will present again today, the outbreak in the poultry facility is a warning call that we can't get too complacent, we need to make sure that our work places are safe"

For municipal governments, the Premier noted how the government has been engaged with the UBCM on the many issues facing communities and how the Province will move forward.

"I spoke with Maya Tait the President of the UBCM just this week, she also happens to be a Mayor in my community, Mayor of Sooke.  We have a long standing relationship and she as the President I believe is doing the best she can to make sure that the programs that we are announcing are well know and understood across the province in large and small communities. Weekly conference calls are held with the UBCM and Minister Robinson, about how we can better work together on delivering services for people"

The Premier also noted the challenges facing communities across the province and how work is continuing to address them.

"They have had a precipitous decline in revenues just as the province and the Federal government has, just as businesses have. And so the municipalities need to find ways to provide services to continue to be available for citizens and they are constrained by a whole host  of issues around being able to borrow, being able to run deficits all of those things are being discussed with Minister Robinson and Maya Tait is handling that for UBCM and I think she is doing so ably"

Speaking to the outbreak of COVID-19 at a Vancouver area poultry facility, which has been traced to a number of employeess attending work while ill, the Premier noted how British Columbia workers will have review how they handle their day to day plans towards work.

"People who are concerned that they won't be able to meet their expenses end up going to work, even if they've got a sniffle,  much less if they  have COVID-19. And I don't think that there's a person watching this conference right now hasn't had the experience of a co-worker showing up when they should  better have stayed in bed. I myself I've certainly come to work when I've had a runny nose and I shouldn't' have done so.  And I think we'll all have a different approach to that now, that we have an understanding of the consequences of COVID-19 and other viruses that may be well be waiting to arrive on our shores"

One area which has generated some discussion across the province, is the government's approach to travel, with the Premier noting as to how he doesn't want to restrict travel for British Columbians and how he believes that they understand well the scope of Dr. Bonnie Henry's orders related to non-essential travel.

"It's not just people from away who can contract the virus and then have it spread through communities; it's people within communities. So I'm reluctant to put restrictions in place for Canadians travelling, put restrictions in place for British Columbians travelling, beyond what Dr. Henry has already said.  If you do not need to travel, if your travel is not essential stay home, and I think that if we adhere to those basic principles we'll be fine"

Noting of the approach of the May Long weekend the premier observed how he hopes to have positive news to share by that point, but for the moment:

"But the May Long weekend is a thousand years away as far as I'm concerned based on my daily schedule and as we get closer to the May Long weekend I am hopeful that we will have a whole bunch of positive initiatives in communities that will put the Ferry issue to one side, but I don't want to be dismissive about but it is weeks from now and I'm living this day by day"

You can review the full press conference below:


For more notes related to the Provincial response to COVID-19 see our archive page here.
Posted by . at 5:22 PM

Email ThisBlogThis!Share to TwitterShare to FacebookShare to Pinterest
Labels: Premier on COVID response and more