Showtime for BC today as Province showcases British Columbia talent 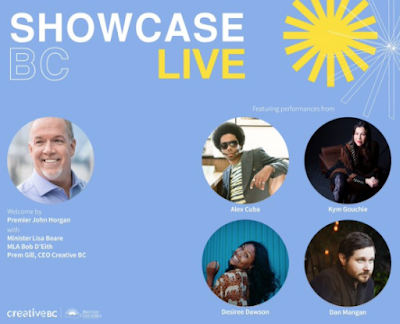 Alex Cuba a familiar face and voice for the Northwest, is one of the headliners in a province wide showcase of talent set for this afternoon as the Province of British Columbia provides the visual/audio platform for a bit of COVID-19 self Isolation.

The Juno and Grammy award winning artist one of four British Columbians on the bill today, will showcase his unique blend of musical stylings as part of the afternoon program.

Joining the talented and popular Northwest musician for today's sampling of provincial talent will be Prince George's Kym Gouchie,  as well as Vancouver based musicians Desirée Dawson and Dan Morgan.

The Showcase presentation will also feature a Welcome from Premier John Horgan who will kick the show off later today.

You can view today's performances starting at 4 PM streamed live here and through a range of BC Government online portals.

The province has also provided for some assistance to the music industry by way of the creation of a new promotional space called Showcase BC, a partnership with Creative BC the new online hub brings a variety of live performances, entertainment and content to British Columbians.

The government is also offering funding for artists in the province through the Showcase BC program.

This new program will provide one-time micro-grants of $500 to emerging artists and $2,000 to established artists for livestreaming, songwriting and professional development. Creative BC will offer grants to all previously eligible Amplify BC applicants.

British Columbians can access all the grant performances for free through the Showcase BC website and get information on new livestream events by following the hashtag #ShowcaseBC on Twitter.

The Showcase BC feed also features an archive of past shows and features, as well as the schedule of viewing that is ahead.

You can also get updates on programming through the ShowcaseBC twitter feed.
Posted by . at 8:59 AM

Email ThisBlogThis!Share to TwitterShare to FacebookShare to Pinterest
Labels: Showcase BC presentations