Prince Rupert's weekly newspaper has joined in on the chorus of news publications from across Canada in issuing an urgent call for financial assistance from the public.

Yesterday the staffers at the Fraser Street offices of The Northern View delivered their appeal for financial support through the papers website, with a story posted on Tuesday evening.

In an article from Office Manager Melissa Boutillier, the Northern View calls on its readers to help the paper"continue its mission to provide trusted local news", making note of how COVID-19 has left a trail of disruption to economic stability across the nation.

The tag line to the main headline of the story offering up a challenge of sorts to readers:

"Trusted, local Prince Rupert News? It's up to you."

For the newspaper industry, the largest impact has been on advertising revenues which had already seen reduced results prior to the COVID  concerns.

Many have now seen a sharp decline in the last few weeks  as many of a group of already skittish advertisers suspend or shut down their operations lay off their staff and bring an end to their ad buys.

It's a situation that newspapers have been facing across Canada and beyond for much of the last few years, exacerbated by the COVID-19 situation, but one which has been an ongoing drum beat, with paper after paper shedding reporters or closing their doors in recent years.

In Prince Rupert, the paper has seen its own challenges, having once featured three reporters as late as January of this year, the more recent editions have certainly seen a reduction in the amount of news covered in the community even before the arrival of the COVID concerns.

A situation that has left some significant gaps in their coverage of local issues, particularly when it comes to the areas of civic government and City Hall issues, as well as the work of the local MLA and provincial initiatives in the region.

Of late the local publication has come to rely more and more of a wider archive of Black Press contributions from across the region to fill its daily web presence and print editions.

The departures from the journalistic ranks of this year, have not seen any replacements hired to date; while other staff positions in Sales have also been eliminated, or remain unfilled.

The evidence found each week with a review of the editorial page and the snapshot of staffing members which continues to shrink.

As we noted back in February, Black Press, the parent company has also taken advantage of a recenlty created federal government program to offer financial help, that through their hiring of journalists under a federal Journalism Initiative program.

The most recent position created through that vehicle found at the Haida Gwaii Observer, where the byline for reporter Karissa Gall comes with the title of Local Journalism Initiative Reporter.

The lengthy Northern View article from Tuesday extols the virtues that the local paper says that it brings to the local scene on a daily basis.

Highlighting how they view their product as that of "high quality, insightful and compelling news coverage and story telling"

Further on in the article, the Northern View launches what in effect is a pledge drive, turning to the public to help their business survive, asking for a one time, or ongoing donation towards their work. 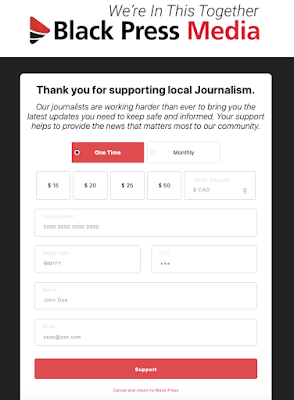 The local call for financial help, which you can review here, comes signed by what is left of the management, office and editorial staff of the paper, as well as the list of those who deliver the paper door to door around the community.

You can review more notes on the media scene in the Northwest from our archive page here.
Posted by . at 9:31 AM