With a number of positions to fill at newsrooms across the Northwest, Black Press has made a dip into the newly created Federal Fund that provides financial assistance to newspapers across Canada.

Earlier this month, the Help Wanted section of Prince Rupert's Northern View featured a pair of positions available; both apparently funded through the Local Journalism Initiative, with positions in Smithers and Haida Gwaii noted as being Government Funded openings. 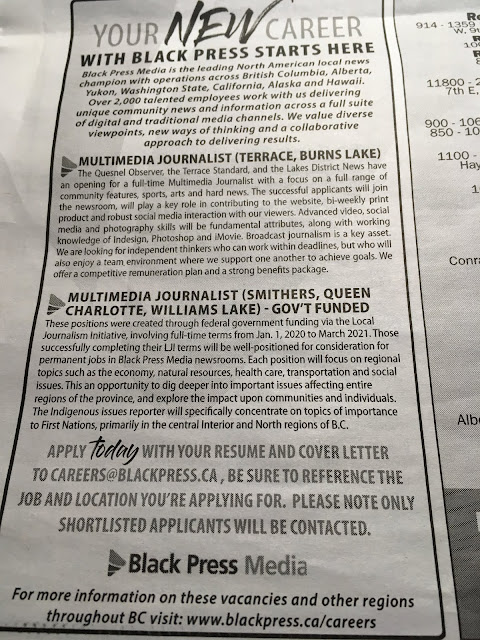 The funding program was announced last year by the Federal Government, part of the Trudeau Liberal's answer towards the ongoing closures of community newspapers and the consolidation of the industry.

Some background on the program can be explored here.

The fund has been a bit of a controversial financial instrument, with many journalists questioning how objective a publication can be, particularly on federal issues, if they are tapping into the vat of money that Ottawa has put on the table.

The Liberal program also drew some heat for ignoring private non-community broadcasters who were left off the list of those available to access the funding.

Despite some recent departures from the Prince Rupert offices of the Northern View, so far there have been No Help Wanted ads posted for positions locally.

Whether funded by the Black Press financials or those of the new Government Fund.

But as they say in Advertising, Watch this Space!

For more notes on media across the Northwest see our archive page here.
Posted by . at 11:53 AM

Email ThisBlogThis!Share to TwitterShare to FacebookShare to Pinterest
Labels: Black Press to use Federal fund for regional news hires