Sunday's announcement from the British Columbia mining giant Teck  relaying its decision to suspend its plans for a major investment in the Alberta oil sands has been hailed by a number of politicians as a victory for climate awareness.

Among those that were quick to celebrate the announcement, was Skeena MP Taylor Bachrach, who took to his Social media stream shortly after the weekend announcement to share his thoughts on the Teck decision. 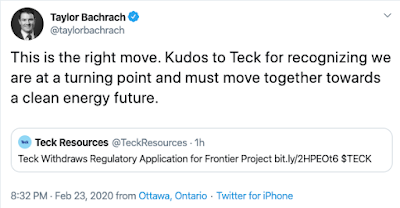 However, the Letter from Teck addressed to Jonathan Wilkinson the Federal Minister of Environment and Climate Change which was released Sunday, does not appear to have been quite the epiphany on climate change that the Skeena-Bulkley Valley MP seems to have divined from it.

Any number of factors have been suggested in recent days related as to why the decision not to move forward was made; included on the list the state of oil pricing and financial capital at the moment, concerns over the pending Federal decision on the project as well as the financials of the mining company itself.

And while climate change is a key element of their correspondence, it's the political climate of late in Canada that makes for the strongest rebuke.

With the resource company highlighting through their letter the ongoing troubles that seem to be knocking down energy projects one after the other, without any clarity to be found on a way forward from any of our political leaders.

At Teck, we believe deeply in the need to address climate change and believe that Canada has an important role to play globally as a responsible supplier of natural resources. We support strong actions to enable the transition to a low carbon future. We are also strong supporters of Canada’s action on carbon pricing and other climate policies such as legislated caps for oil sands emissions.

The promise of Canada’s potential will not be realized until governments can reach agreement around how climate policy considerations will be addressed in the context of future responsible energy sector development. Without clarity on this critical question, the situation that has faced Frontier will be faced by future projects and it will be very difficult to attract future investment, either domestic or foreign. 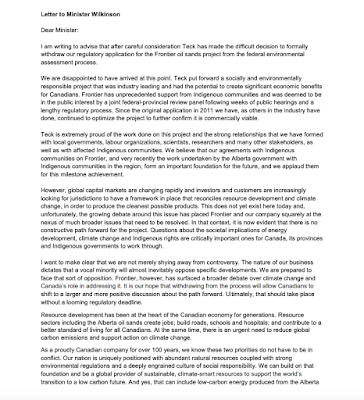 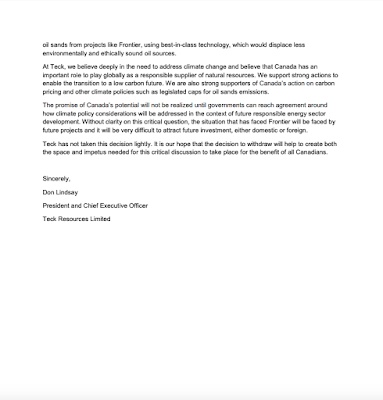 And while Mr. Bachrach, who has long been on the climate action side of the Canadian discussion was praising the move as a positive thing; that was not a theme universally shared, especially among a range of politicians and organizations who noted with some alarm the ongoing demise of the Canadian energy sector. 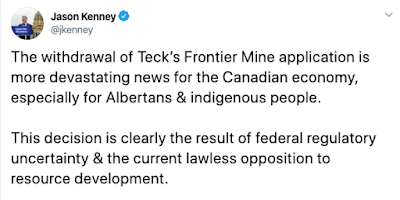 The topic even received a short mention on Monday in the BC Legislature from Skeena MLA Ellis Ross who made note of the Teck decision and the impact it would have on fourteen First Nation communities in Alberta who were set to benefit in a number of ways from the development.

"I see that there's celebration by politicians in B.C. and Canada, talking about the demise of Teck. That is to celebrate the economy declining in Canada and to see those investors go to the United States.

What country do you represent? Why do you ignore the 14 First Nations that have actually supported Teck for the reasons I just mentioned?

Some of the media reviews of the Teck announcement, which you can review below make for a good cross section towards some of the debate.

Ottawa's climate-energy policy conflict sinks Teck's Frontier oil-sands project
Teck Resources pullback a wake-up call for Canada on climate, energy
Bickering over the Teck Resources decision will only push us further off course
Teck CEO says miner is facing 'perfect storm' after pulling plug on Frontier
Teck withdrawal warns that Canada's natural resources policy is stuck in a cyclical conflict
Trudeau's 'weak leadership' drove Teck mine away, Andrew Scheer says
Why can't Canada do Business? Blockade Gate: Teck Resources pulls out of project
Shelving of proposed Frontier mine shows Canada is in need of a political reckoning
The Teck decision is the culmination of Trudeau's anti-oil agenda
'Disappointment, fear and anger:' Indigenous communities blindsided by Teck's decision to pull Frontier project
'Urban-green-left zealots' are hurting future of Indigenous people, Jason Kenney says
Cancelled Teck Frontier means even First Nations' support can't get projects built
On the Teck Frontier Mine: Stumbling in the shifting sands
Teck pulling out of oilsands project 'another straw on the camel's back' for Alberta economy: think tank
Kenney says Trudeau government sank Teck mine with deadline change, but Ottawa says 'not true'
Teck Resources has abandoned its Frontier mine plan. Here are the factors being blamed
Shares down after Teck Resources withdraws application for Frontier oilsands project
Teck's Oilsands Mine: The Case kept getting worse and worse

For further items of note on the work of Skeena-Bulkley Valley MP Taylor Bachrach see our archive page here.

For a wider overview of the political debate in Ottawa see our D'Arcy McGee portal and our Ottawa Observations archive.
Posted by . at 11:14 AM

Email ThisBlogThis!Share to TwitterShare to FacebookShare to Pinterest
Labels: Bachracnh on Teck announcement