The overnight snow and cold temperatures made for some challenging conditions for drivers on Monday morning, with few of the city's streets, hills and intersections getting much attention as late as 8 AM.

The snow which fell on Sunday evening, froze overnight, making for somewhat of a skating rink for the overnight and early morning period, with drivers having some challenges in some areas around town, particularly on the streets with hillier sections around the city.

The Highways contractor did have McBride, Second Avenue West and Park Avenue tended to from the start of the light dusting of last night through the morning; however for the most part it did not appear that city crews had commenced with their work until just after 7:30 AM. 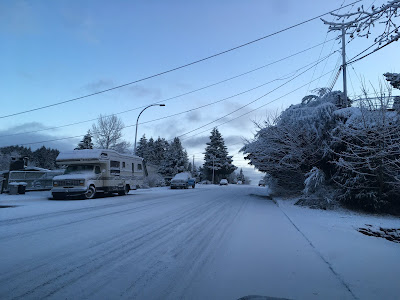 What the city leaves for Mother nature to tend to through the day should see some progress by later this afternoon, with rain and warmer temperatures expected by this evening.

More notes on City Council discussion themes can be found from our archive page here.
Posted by . at 8:15 AM