Almost a week of politicking down in Victoria has Mayor Lee Brain returning to the North Coast seeming quite energetic, that from the notes from the Mayor delivered through his Social media platform on Thursday.

In his dispatch from the pre flight area, Mr. Brain provided a synopsis of some of the events of the week, which included his attendance in the Legislature for the BC Budget speech, with the Mayor right in the heart of the Chamber, three deep on the Liberal side of the House for the day.


From his Facebook page Mr. Brain recounts a round of meetings he had with a number of ministers and provincial ministries, noting how over his five years in office now the City has worked to build positive relationships with both politicians and bureaucrats.

As the Mayor tells it in his post, many of the Deputy Ministers in the Horgan government have read through the City's ambitious 2030 vision document, with Mr. Brain noting that an inter-ministerial team is coming together to discuss how to support Prince Rupert's development plans.

The Mayor also takes a moment from his Victoria review, to make note as to how the new Vision plan will require the work of a Vision Stewardship Council of local partners that will oversee the next decade of development , a private sector/municipal arrangement that City Council has not dedicated much public discussion time towards while in Council chambers.

That apparent new and somewhat unelected level of governance is really a topic that the Council membership should bring to the public forum, in order to clarify what each partner brings to their roles and what accountability the public may see from the new arrangement.

Beyond the new era for development, the Mayor makes note of the upcoming City Budget process and the reworking of the City's official Community Plan.

As well he offers up a check list for where residents can expect to see progress this year. 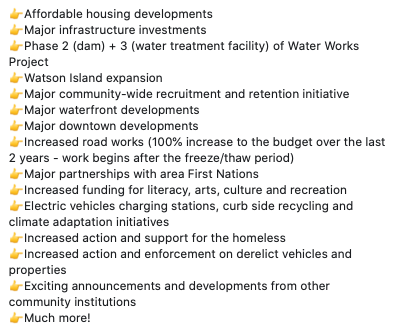 The Mayor wraps up his latest Facebook notes with very much a clarion call to action for the community and those who as he puts it "believe in this community" to rally to the Council plans for the years ahead.

Though it does leave one to wonder, if anyone who may have a few questions when it comes to some of the plans and decisions by Council, has any kind of role to fill in the new Prince Rupert of the vision plan.

"Folks, this is Rupert’s time and I hope that all those who believe in this community will come together to make it happen with us. I’m looking forward to seeing a brand new community emerge over the next few years in partnership with all the amazing people of this place we call home." -- Mayor Lee Brain from his Facebook notes of Thursday

The Victoria trip this week is just the latest of out of town travel for the mayor in what has been a very busy six weeks so far.

You can review his Facebook page talking points here.

For more items of note on Council Discussion themes see our archive page.