As events continue to  unfold in the Bulkley Valley's Wet'suwet'en territory, and Wet'suwet'en supporters and anti-LNG protesters remain in place at a number of locations in British Columbia and across Canada, one more Indigenous voice has been added to the mix.

With the Nisga'a Nation issuing a statement today, staking out a definite stand in support of LNG Development in British Columbia.

The information release, which was posted to the Nisga'a Lisims Government website today, outlines how they had reached their decision to support development of gas resources in the province after a rigorous environmental assessment process and a thorough process of consultation.

"Our decision to support LNG development was made only after a rigorous environmental assessment process and a thorough process of consultation. We continue to believe that such processes can result in an LNG project that strikes the right balance by bringing significant economic opportunities to our Nation and our people, while minimizing impacts to our lands and resources."

Making note of the alliance that they have built with the Lax Kw'alaams, Metklatkatla and Haisla Nations through the First Nations Climate initiative, the Nisga'a further expressed their concerns over recent events and the impact it may have on their future plans.

"We are very concerned that our aspirations and tireless efforts to bring environmentally responsible economic development to our lands and economic prosperity to our people may be frustrated by a small and disruptive minority who oppose LNG development, many of whom have agendas other than advancing the interests of Indigenous people in British Columbia."

The full statement can be found below: 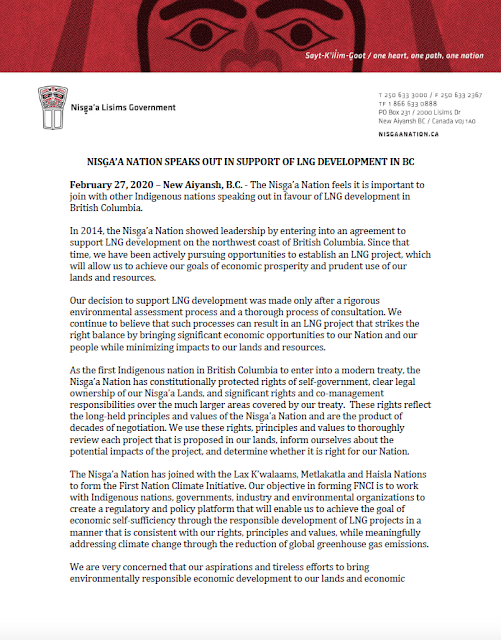 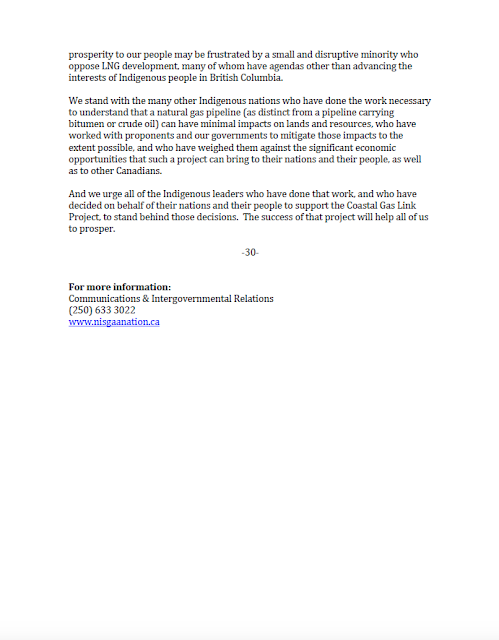 The first public commentary from the Nisga'a Nation will make for an important addition to the current debate over the issues of the Wet'suwet'en area.

As well, their views reinforce the themes of those who have commented as to how the dispute in the Bulkley Valley has at times, been overtaken by a range of environmental groups who have used it to push for their own agendas against LNG development.

For more of our items of interest from the Nisga'a Lisims Government see our archive page here.

Email ThisBlogThis!Share to TwitterShare to FacebookShare to Pinterest
Labels: Nisgaa statement reinforces their belief in an LNG industry in BC