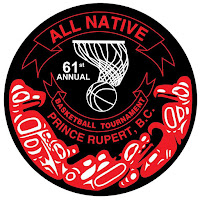 A week to celebrate Basketball and the gathering of First Nations that flashed by in an instant it seems, came to its frantic conclusion on the hardwood of the Russell Gamble Gymnasium Saturday, as large crowds paid tribute to the last eight teams standing at the 61st edition of the All Native Basketball Tournament.

The day which started off with a pair of Semi Finals in the morning for Intermediate and Senior's Divsion Play, shifted gears to the Final Four contests, with the Women's Division leading off the championship finals at 1PM.

The first tip off for tournament finales coming as Hazelton and Kitamaat Women's teams took to the court with the Haisla team building on a strong offensive display to wear down the Mystics, the Kitimaat women showing that finish that has made them repeat champions at All Native Time.

As the clock wound down to start the celebrations for Kitamaat, the cadence of the day would be 1-2-3 ... that as Saturday's 75 to 48 victory made for a three peat for the Haisla, who will rule the Division for another year.

Next up was the Master's Division and the New Aiyansh/Hydbarg game made for some Showtime Basketball for the Russell Gamble crowd, the two teams trading off offensive spurts and shut down defensive play, the score never getting out of reach for either as they took the game deep into the final period with things very much still to be decided.

The play for both indicative of their never say die spirit that carried both through the early stages of tournament week all the way to the Saturday showcase that they delivered.

The game in the end came down to a remarkable last second three point shot from Richie Wolf that secured the 67 to 66 victory for the Nass Valley. .

The 6 PM Intermediate Game gave the youth of Prince Rupert basketball the Big Stage and they took full advantage of all the attention, putting on a strong display of skill and passion, dominating the majority of the play on the way to an impressive 89 to 66 victory over a Bella Coola team that battled hard but found that the Rupert team was a hard team to break down, let alone build any momentum against.

In the end, the Bella Coola squad which had a remarkable run through Tournament week after an opening game stumble,  just couldn't keep the pace that the Prince Rupert team had set for the entire game.

The win setting off a celebration for the hometown team and its fans.

The Finale for the tourney belonged as it always does to the Senior Men's event, with Metlakatla Alaska and Skidegate hitting the court in the heavyweight battle, the Alaskans coming into the finale riding an undefeated streak, while the Saints were on their second game of the day having claimed their berth in the final just nine hours previous in the semi.

The Seniors game did not disappoint for storylines, with Metlakatla showing the skills that helped roll them through the play of tournament week, though the Saints would show their resolve in the second half, catching a second wind from their hectic schedule of the last 36 hours they began to mount a comeback that left their competitors somewhat shocked by games end.

Strong play from Jesse Barnes made for the key element to the Saints push in the final frame taking the team into the lead and never looking back, the celebration for Haida Gwaii launching with the 76 to 64 final score.

And with the Saints, like many other players and fans making their plans for the return home the 61st tournament comes to an end, the annual gathering of the Nations making for another event to remember.

For the champions the year ahead will offer the chance for celebration of excellence, for all those who participated through the six days of competition, the plans for 2021 are already in motion, the teams looking to take that final step to champion status, the fans ready to come for the ride that tournament week brings.

CFNR which was the host broadcaster has some extensive items of note to review.

As well, as the wind up to the tournament wraps up, the ANBT Facebook page will be another valuable resource to capture some of the spirit that made for Tournament week.

For a look back at some of the themes of the week from the NCR see our archive page here.

Email ThisBlogThis!Share to TwitterShare to FacebookShare to Pinterest
Labels: ANBT wrap up 2020