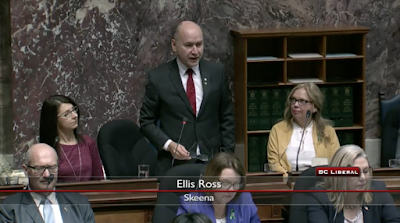 "Inflame the situation. It's too late for that. Members on that side already did it. We're not the ones that signed anti-LNG declarations. That side of the House did it. We're not the ones that made comments to destabilize elected band councils in B.C. Members on that side made those statements. You helped this issue, and now you claim to be the ones to fix it." -- Ellis Ross opening his contribution to the debate in the Legislature on Wednesday.

Themes of the Wet'suwet'en protests of support that have become daily events in  many parts of Canada made for some of the the narrative again in the British Columbia Legislature on Wednesday.

As a number of opposition BC Liberals reinforced their recent observations that much of the tumult of this month had its seeds planted by the NDP when they were in the Opposition seats and how the Liberals believe the NDP offered support to a number of activist activist groups which now has emboldened them.

The commentary of the Question Period making for another raucous afternoon in Victoria.

For the Skeena MLA, the presence of what he calls radical activists has long been a concern, a theme he has brought to the Legislature many times before.

Wednesday he returned to some of those themes and how the mixing of their agendas with the current dispute in the Wet'suwet'en serves to disrupt the ambitions of many of the Indigenous communities in the region.

Right now there are activist organizations that want to keep Indigenous people below the poverty line through misinformation and manipulation. Nobody has gone to meet with these elected band councils to hear their story. Illegal protests are aimed at shutting down opportunities that my band has fought for since 2004.

In fact, it was my band that brought the LNG opportunity to this legislature. It was Christy Clark that finally listened to us and said: "Okay. We'll look at it. We'll follow up for you."

But all we get is posturing and politics from a government that historically has been playing both sides of this issue, and stuck in the middle are average Aboriginals.

My question is to the Environment Minister. Will he denounce the eco-colonialist actions of these radical groups and get Canada back on track? 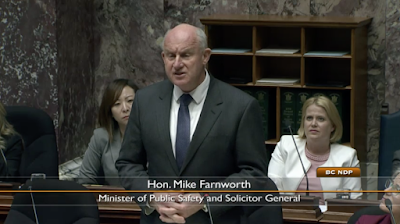 The Solicitor General and Public Safety Minister Mike Farnworth took up the replies on the afternoon on behalf of the Government,  making note of the current tone of discussion in the Legislature and how it was not something helpful towards a resolution:

From the very first day that that project was successfully announced and delivered by this government, that side of the House did not like that one little bit, because we recognized the opportunity that it brings to that member's riding.

That's why we are working with the federal government, other provinces, the RCMP, First Nations. The Minister of Indigenous Relations was up in Wet'suwet'en territory for ...

You know, that attitude is exactly what is not needed. If we are to find a solution, that means having dialogue with everybody involved to get a resolution to that. We're committed to that. They're clearly not.

The Skeena MLA's rebuttal put the focus on the work of the BC Liberals in the formative days of the development of an LNG industry in the province and how the NDP then in opposition had aligned themselves with those who oppose the industry.

It's true. Your government brought this to fruition. But you did none of the heavy lifting.

In fact, in the 15 years of consultation and accommodation on all the LNG projects in B.C., you aligned yourselves with the environmental activists. It's in Hansard. All your statements that you made in an emergency debate in the summer of — what was it? — 2015…. Everything you said is on the record.

You also mentioned going out to meet with the Hereditary Chiefs. I asked this question last time: how many of you, at the same time, went to visit the elected Chiefs — who are not bad people, that have been demonized in the press, who have been destabilized because of remarks that came from that side of the House?

Now you want to try and fix the situation. What was the remark that was said?

You've got…. "It's important to remember: elected band councils are a construct of the Indian Act, meant to annihilate the Indian." Who said that? Put your hand up.

For the first time in our history, communities like mine can make decisions for ourselves to deal with our own issues on our own terms. Instead, all we get is condescending platitudes from the likes of Tzeporah Berman and other activist friends of the Environment Minister.

So this time it's going to be a simple question to the Environment Minister: whose side are you on? 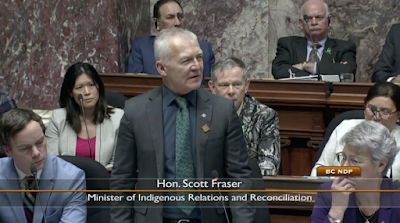 Scott Fraser, the Minister for Indigenous Relations took over the government response for that inquiry, offering an update on what the Provincial government plans were moving forward.

We are facing a very serious situation in this province, in this country. As has been mentioned already, we support the right of peaceful protest, but the disruption of the country's rail systems and infrastructure has a serious impact on the economy and on people's lives.

We all get that, and we all need to be working together. There is a project that has received its permits and has its environmental assessment process in place, spanning two governments. The project is underway. We are working to try to de-escalate the issues that are before us. It was mentioned that I have travelled up to meet with the Wet’suwet’en Hereditary Chiefs. It's more than once.

I'm working closely with my federal counterpart, Minister Bennett. I met with her on Monday. We've offered, both of us, to be there at the drop of a hat to de-escalate, to deal with these issues. We were able to work with the Gitxsan Hereditary Chief, Norman Stephens, who had made that wonderful offer — which we accepted.

Through dialogue, we were able to de-escalate the rail blockade at New Hazelton, and I want to thank Hereditary Chief Norman Stephens for that show of good faith.

That's the kind of work we need to do to overcome these serious issues — not the acrimony that's going back and forth and trying to cast blame where there may be no blame.

The exchange between Mr. Ross and the Minister was just one of a number of variations on the day, you can review much of it from the Wednesday Question period.

The Ross/Farnworth discussion is found at the 2:21 PM mark.

You can also review the full Question Period commentary through the Legislature Hansard.


For further items of note related to the work of the Legislature see our archive page here.
Posted by . at 9:31 AM

Email ThisBlogThis!Share to TwitterShare to FacebookShare to Pinterest
Labels: Ross speaking on themes of radical activist groups on the Wet'suwet'en issues