It was but a single half line from a list of provincial spending outlined in the Tuesday budget delivered by Finance Minister Carole James, but for supporters of plans for a new Mills Memorial Hospital in Terrace, the Finance Minister's words made for yet another benchmark for the long anticipated new Medical Facility for the Northwest. 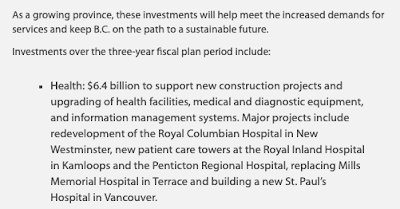 Skeena MLA Ellis Ross made note of the good news through his Social media feed on Wednesday, with the Liberal MLA benefiting in the way of congratulations for the progress for the project. 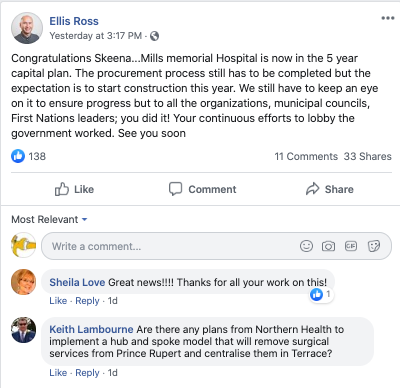 In amidst all the praise for the positive momentum for the hospital, was a comment from Prince Rupert however, that while perhaps misdirected towards the Skeena MLA's social media stream; still does provide a glimpse as to some of the concern in Prince Rupert as to the fate for local medical services on the North Coast with the prospect of a larger more advanced medical facility soon to be built.

"Are there any plans from Northern Health to implement a hub and spoke model that will remove surgical services from Prince Rupert and centralize them in Terrace?"

It is probably a question that Mr. Lambourne, or others in the community may wish to take to their own MLA, representatives of Northern Health or Prince Rupert City Council.

It has been a topic in the past that Councillor Barry Cunningham occasionally has brought to Council's attention, most recently in the May of 2019.

"I'm a little concerned about us possibly losing some of our services and as we discussed once before, bringing up a health advisory group, and I wold like to maybe in the next meeting discuss that or actually bring the points to do that"

Though, as things have evolved, we never seem to hear any follow up notes from the Mayor or Council, when it comes to whether they have secured any reassurances from provincial officials.

Since they seem to have some troubles when it comes to creating and filling council Agendas these days, what with Council meetings of seven and fourteen minutes of late.

Perhaps Council could invite both MLA Jennifer Rice and officials from Northern Health to Council for a public presentation on how the new facility in Terrace will work in concert with Prince Rupert.

Providing a chance for the Council members to maybe ask a few questions on behalf of residents as to future plans in Prince Rupert and to secure some reassurances that local medical care won't decline once the shiny, new facility in Terrace rises on its foundation.

More notes on Northern Health can be explored here.