The near two week reduction in Internet services for CityWest customers of earlier this month offered up a good example as to how our ever growing use of the digital world is at times a hostage to events far beyond our service area.

As we recounted during the period of reduced bandwidth access, the issues for CityWest and their customers came from damage suffered to the main fibre trunk near Boston Bar, which only returned to full service on February 13.

During that reduced service period, CityWest made note of how the Connected Coast initiative announced back in 2017, would serve to provide for redundancy for the Northwest, something which would help to reduce, if not eliminate the impact of such outages.

However, progress on that much anticipated project appears to have stalled of late, the last actual update on the program coming in June of 2019, when Strathcona Regional District, one of the partners in the initiative hosted a Community planning presentation and workshop for residents on Vancouver Island.

From that point, there have been no further updates and certainly no celebration of the start of the laying of the fibre optic backbone that will connect the Northwest, Haida Gwaii and Vancouver Island with the larger internet infrastructure of the nation. 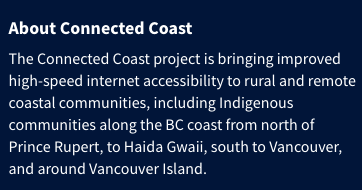 The North Coast Review contacted Chris Armstrong, the Director of Marketing with CityWest to inquire about the status of the project and what appears to be a delay for it; though at the moment there was no indication of a timeline in place towards any forward momentum for it.

"For Connected Coast, we’re still going through the administrative process before any fibre is laid, at this point we're not sure as to how long the process is going to take"

As Mr. Armstrong notes, the project schedule indicates that at this point, the process is still that of consultation and regulatory review, which might make some wonder if they'll be able to make their 2021 deadline of delivering on points of connectivity or if a delay and review of those benchmarks may be in order.

Should there be any updates on that process you can follow the timeline and further notes from the Connected Coast website.

You can review the scope of the project from this introduction to Connected Coast.

Some of our past notes on the Connected Coast project can be reviewed below:


For more notes on communication on the Northwest see our archive page here.