A third day of Zones competition wasn't required over the weekend, as the Charles Hays Rainmakers dominated the court on Friday and Saturday on their way to another Northwest Zones championship and the chance now to defend their Provincial AA title in Langley next month at Provincials.

The Senior Boys began their work on the weekend on Friday afternoon tipping off against Caledonia in the tourney icebreaker at 2PM, taking the first match of the 2020 Northwest Zones 67 to 26.

That set the stage for the Saturday semi final, with the Kermodes prevailing over Smithers, the 68 to 45 victory moving Caledonia on to the Zones final and a 5 PM tip off with the Rainmakers.

With their title defence on the line and another chance for some travel to Provincials the reward, the Charles Hays Boys brought their A game to the court, taking control early and keeping the Kermodes off pace for much of the contest, taking the Zones with an 87 to 37 victory.

The Senior Boys will be making their way to Langley next week with the AA Tournament set to launch at the Langley Events Centre from March 4 to 7. 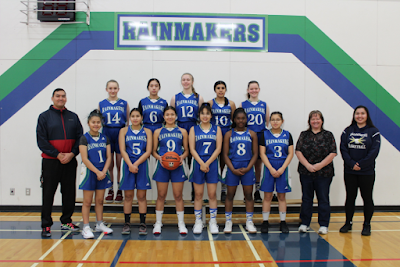 On their way to the same venue this week are the Senior Girls from Charles Hays, as we noted last week, they are in Langley for their Provincials starting on Wednesday the 26th.

The Rainmakers tip off in the opening round against Okanagan Mission at 8PM on Wednesday.

The Junior Boys are wrapping up their tournament experience this week, Kevin Sawka's Rainmaker team started things off on Saturday, running in to a few hot teams over the weekend before finally securing their first win on the B side of the event today over Brookswood.

They will put the wrap on their 2019-20 basketball season tomorrow at 11 AM with a matchup with Claremont.

Also noted over the weekend was the success on the court for the PRMS Storm, with the Middle School celebrating a Grade 8 Championship season following their Zones competition.

The success of the Storm was celebrated as part of the twitter stream for Charles Hays Secondary, serving perhaps as the first introduction for some potential Rainmakers of the future.

Email ThisBlogThis!Share to TwitterShare to FacebookShare to Pinterest
Labels: Rainmakers and Storm celebrate success on the court