Update 9 PM: RCMP cleared the rail blockade mid evening Monday, the protest then shifted to Highway 16 which has now been blocked.

Social media accounts are making note of an ongoing protest in the New Hazelton area today which has seen a blockade once again  put in place on the CN Rail northern mainline.

This one reportedly in response to arrests made earlier today in Ontario, where Police moved to remove a blockade near Belleville, Ontario. 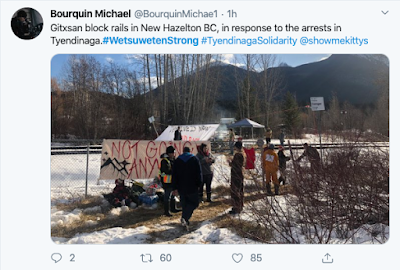 The CN line last saw a blockade earlier this month lasting nearly one week, returning to service on February 14th.

At that time the Port of Prince Rupert outlined the impact that the shut down of the rail system had on its operations and on those who work across the Northwest.

So far, there has been no indication from RCMP as to any enforcement plans for the New Hazelton situation.

More items of note on CN Rail service in the region can be found here.

For updates on the range of protests taking place today, see our Political Bloc D'Arcy McGee for our wrap up of the day's notes on the Federal and Provincial scene.