Prince Rupert City Council hasn't offered up much in the way of updates on the progress for the Watson Island Intermodal Trade and Logistics Park since Pembina Energy outlined their initial investment plans back in 2017.

But it seems that when officials from Burns Lake recently made some inquiries about the background to the city's Industrial site, the red carpet was rolled out as they City showcased their plans for the once shuttered pulp mill lands.

The eye catcher for the Burns Lake EDO, the 75 million dollars in anticipated revenues in leasing payments and property taxes expected to be delivered over the course of the long term commercial agreements in place.

So far the only tenant identified for the site has been Pembina's interest, with the Alberta energy company recently increasing its footprint on the industrial site.

In her notes, Ms. Watson outlines for the Burns Lake Council how the City has invested approximately 250 million into the Watson Island site as part of the redevelopment project.

The report also explored some of the themes related to the City's Prince Rupert Legacy Incorporated instrument, which the City of Prince Rupert uses towards acquiring, leasing and disposing of city lands, among other purposes at the direction of the City.

While the Legacy Incorporated Focus is on the perceived advantages and disadvantages of the city's financial instrument.

The Five pages of the report are included on page 33 of the February 4th Agenda for Burns Lake Council, we provide a copy of it below:
(click to enlarge the panels below) 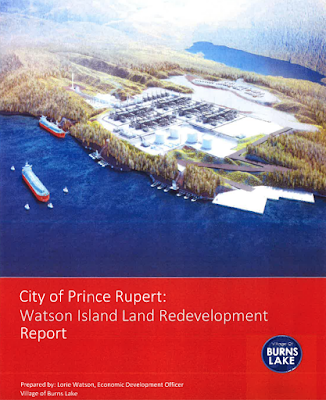 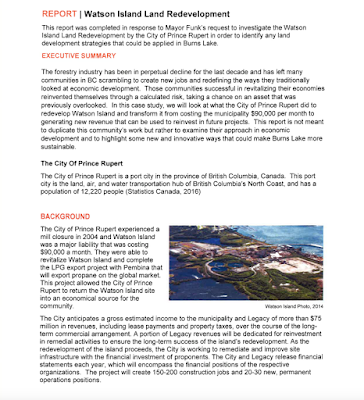 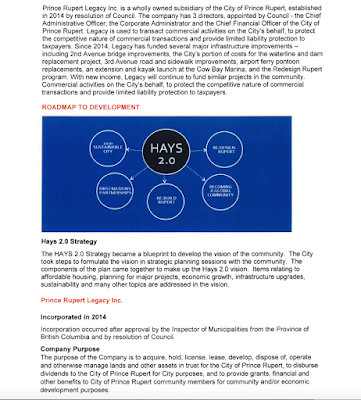 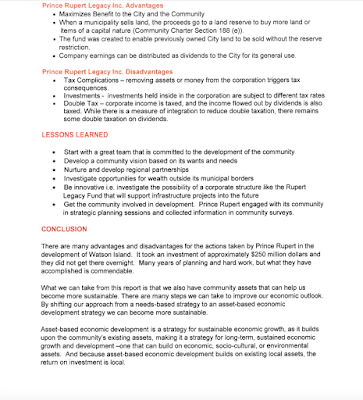 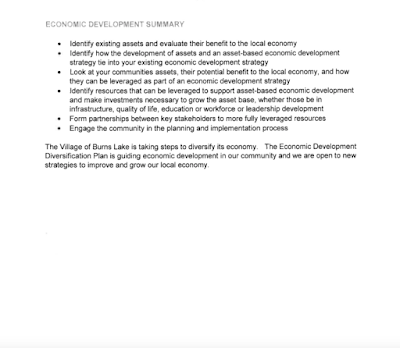 The inquisitive and lucky residents of Burns Lake,  now perhaps know more about the two Prince Rupert projects; than those of us who live within the city limits and make for the actual shareholders of the city's portfolio.

As we've noted numerous times over the last number of years, neither the progress of the Watson Island initiative, which is often cited on the Mayor's Facebook page as our newest gem; nor the mysterious work of the Prince Rupert Legacy instrument ever seem to make for much discussion in a public Prince Rupert Council session.

Though one imagine's that the topics are surely part of the off the grid agendas for the many closed Council sessions that the City Council members host during the course of a year.

If any of the council members are inclined to share some thoughts towards  a similar style report and public presentation for their own residents, they could always make use of Monday's City Council session to set out a timeline for a public review in the weeks to come.

Offering Council a chance to put aside some time to provide Prince Rupert residents with some insight into how both of the initiatives are performing these days.

Email ThisBlogThis!Share to TwitterShare to FacebookShare to Pinterest
Labels: Report on Watson Island for Burns Lake