One day ago Premier John Horgan extended Provincial Orders for a State of Emergency and spoke to concerns of rural and remote residents on the topic of  non-essential travel and any path ahead towards the eventual return of some semblance  of normalcy in British Columbia.

With some of his comments on the day directed towards residents specifically on Haida Gwaii and the Central coast.

"There's been discussion about tourism, the hotel sector is going to be critically injured over the next number of months, because people will not be coming to British Columbia. We'd like to see I hope in the not too distant future, people travelling around British Columbia.  But you've also seen, how communities have responded, rural and remote communities have responded to the prospect of people from away coming for a visit.

All of those issues are going to have to be dealt with, Government doesn't have a magic formula there but kindness and compassion and a sense of confidence that there are processes and guidelines in place to protect public health, will allow us to open up completely, not just industry, not just businesses, but communities as well."

"I'm speaking specifically about the case of Haida Gwaii and Bella Bella and other places who have said we'd like to see you, but we don't want to see you now. The example that just shines in my mind is Tofino.  A tourism town, that still feels, rightly so that they are concerned that people from away could bring the pandemic to their territory and their community and they don't want to see that. We need to see as a society, to come to terms with how we can all interact together as we did before in the benefit of everyone"


However less than twenty four hours later, the response from many First nation and municipal leaders in the coastal area of the Northwest seems to be along the lines of not quite enough John.


Part of the push back, which was led by the Council of the Haida Nation came by way of a statement issued over the noon hour through the CHN website, with the key passages being:

On April 6, North and Central Coast communities issued a joint letter calling on provincial and federal authorities to support travel restrictions (the joint letter can be viewed here).

In more than three weeks, signatories have not received support from BC or Canada, and the danger to remote communities was compounded by BC’s recent declaration that fishing and hunting are essential services, which permits non-residents to fish and hunt in First Nations’ territories. The pressure is increasing with more confirmed cases in the region and COVID-19 impacts in the small Island community of Alert Bay.

With a lack of action, First Nations are forced on to the frontlines and bear a tremendous amount of risk to protect communities. Following a checkpoint preventing non-residents from visiting Haida Gwaii on April 27, Dr. Bonnie Henry was asked if communities can tell visitors they are not welcome. Dr. Henry responded, “This is part, of course, of our relationship with First Nations communities and their self-government and self-determination and they do have the ability and authorities to make those decisions for their communities.”

Today saw a group of Haida Nation supporters answer the call from the Council of the Haida Nation, with a group estimated to be in the twenties arriving at the Prince Rupert Ferry Terminal on Park Avenue to advise any would be ferry non-essential passengers in the line up for the  Thursday sailing that now was not the time for travel.

In a Facebook post yesterday from one of the organizers of the local action, supporters of the Haida were asked to gather at the BC Ferries terminal to reinforce the message that Haida Gwaii is closed.

"This is a call out to all the Haida people in Prince Rupert to come join us at BC Ferries along the highway towards the Ferry at 12:00 pm. If you can, please make your own signs, wear your regalia and pass this to other Haida people and friends to come join us to send a loud message that Haida Gwaii is closed."

A previous sailing earlier this week resulted in a checkpoint being set up on the Skidegate side of Hecate Strait, though a subsequent report indicated that none of the 32 passengers who travelled from Prince Rupert to Haida Gwaii on that sailing were considered to be non-essential visitors. 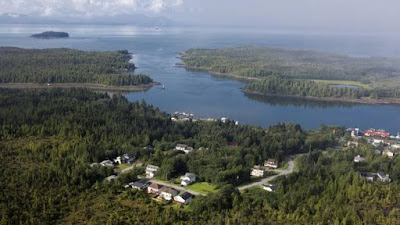 Also part of the Council of the Haida Nation Statement today, was a statement from Lax Kw'alaams Mayor Garry Reece who indicated that members of the Tsimshian Nation would also be taking measures to set up their own checkpoint, though it was not clear when that will take place or where along Highway 16 the checkpoint would be set up.

“The Tsimshian Nation is preparing our own actions to protect our members and the people living in our territories. Lax Kw’alaams has reserve lands that cross Highway 16 between Terrace and Prince Rupert and we are preparing to create a checkpoint to monitor and enact travel restrictions. We cannot let this virus come into our community, there is just too much at risk for our people" -- Lax Kw'alaams Mayor Garry Reece

At the moment, both the Lax Kw'alaam Band Council and Metlakatla First Nation have put in place their own actual lockdown in their communities, banning any non residents from travel to their communities, with limitations even on those who may be essential also in place.

Among the signatories to today's CHN statement was the Mayor of the District of Port Edward Knut Bjorndal, who spoke to concerns over the prospect of hunters and/or fishermen arriving in the region.

“The inclusion of hunting and fishing as essential services by the BC government does not mean that travelling to remote areas of the province is acceptable during this pandemic. This is not the time to leave your home communities. The District of Port Edward is equally concerned about the travellers who do not seem to be getting the message and we will continue to collaborate with our neighbors, other government agencies and health providers to protect our most vulnerable.” – District of Port Edward Mayor, Knut Bjorndal

While Mayor Lee Brain is not noted in the list of quotes from todays statement, the Prince Rupert Mayor did however alert the community to the latest notes from the CHN through his Social Media page. 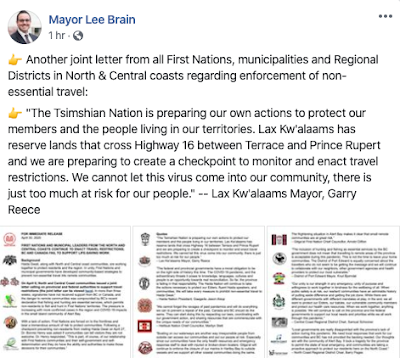 However, when it comes to the topic of non-essential travel in the region,  the Mayor and City Council appear to be sending out some mixed messages to one group of travellers that being vessel owners and their passengers.

While Mayor Brain seems very supportive of the call today and those of the past from the Council of the Haida Nation, as we noted earlier this week, the city owned and operated Cow Bay Marina still appears to be welcoming the boating community to the North Coast.

With no advisories calling for a halt of travel or versions of  "a drop by some other time" message to be found to this point on either the CowBay Marina website or Facebook page. 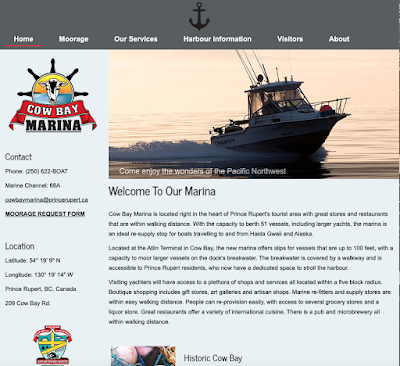 You can review the full Council of the Haida Statement from the CHN website here.

Some of the past notes related to local measures towards a COVID-19 response can be found from our archive page here.

Email ThisBlogThis!Share to TwitterShare to FacebookShare to Pinterest
Labels: More calls to limit travel in North Coast and Haida Gwaii