Prince Rupert City Council will soon be sending out the invitations to those groups that receive funding from the city, offering community organizations an opportunity to provide an update on their work and a chance to showcase what they offer to community.

The community input program will be launched through the City Council Committee of the Whole process, which sees public comment opportunities offered up once a month.

As we noted on Monday, It's a community engagement initiative that has been proposed by Councillor Cunningham in the past and one he brought to the Council chamber on Monday evening as a motion for consideration.

Towards the end of the Monday session, Mr. Cunningham outlined the nature of the motion that he and Councillor Mirau have been working on, one which in its initial phase will be used to bring the list of Community Enhancement Grant recipients to council to provide for the updates.


"Councillor Mirau and I drafted this up together, we had some discussions about it and that, I think that it speaks for itself. The resolution is to bring funded societies, or organizations that we fund to Committee of the Whole to open it up for discussion. And I think it is something we should be doing so we can give transparency to the community. And let the community know what exactly is going on with these, I think it's a good start towards going down that road."

The original motion was included in the Agenda package for Monday's session.

As part of the discussion to the theme, Councillor Thorkelson offered up the suggestion that the proposal not be limited to just those groups that are funded by the City, but that it also include any group in the community which wishes to make a presentation to Council, with Ms. Thorkelson  looking to add that proposal to the concept of community engagement.

Council Thorkelson also suggested that the City should try to encourage organizations that are involved with community recreation to come and explain how they are working together to provide for recreation options in the community.

"I have been hoping for all my years on Council that we would get ... and maybe this is something that we could try to foster under resolutions such as this, to try to get organizations that are involved in recreation; the Curling Club, the Racquet Club , the Civic Centre, the Golf Course all to come at the same time and explain how they are working together to try to encourage sporting activities across the gamut of the services we are supporting.

Recreation is only good if people take advantage of that, so to say what kind of coordination they are making between the different groups, I've been trying to encourage that, and I would hope maybe  that they could come at the same time and not only give a presentation on what their individual organizations are doing and how they are doing with recreation, but also how they are working together for the promotion of recreation in Prince Rupert"

That was a theme that Councillor Cunningham who is a member of the Recreation Commission echoed, noting that those groups could make use of the opportunity of that forum to better promote their programs.

On the topic of bringing in City Department heads to provide similar updates, Councillor Mirau outlined the nature of some of his hesitation towards using the COW process to include reports from those city officials, observing how he  fears that the city may be overstepping its bounds on governance.

One other aspect of Councillor Cunningham's motion is to also have the City's Fire/Rescue service and RCMP detachment provide regular updates to Council as part of the COW process.

The Mayor noted that when it comes to any reports from the RCMP or Fire Department that the main presentation would be limited to stats and notes of their work in the community and not operational aspects.

The speaking opportunities for community groups and other participants for 2018 however will be somewhat reduced from previous years.

With Council already into March now, that leaves room for but eight potential Council of the Whole sessions opportunities left on Council schedule for this year.

Back in December, City Council members voted to reduce their Public session workload for this year, included in that decision was the cancellation of any Public Council Sessions for the months of September and October. 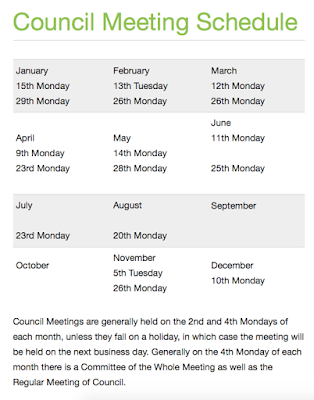 You can review the discussion from Monday setting up the community engagement opportunity from the City's Video archive.  It starts at the thirty seven minute mark.


For more notes on Monday's City Council session see our Council Timeline Feature here, as well as from our Council Session Archive page.

Further background on City Council discussion topics can be reviewed from our Council Discussion archive.

To return to the most recent blog posting of the day, click here.
Posted by . at 2:54 PM